Wonton Chip Nachos with Asian Short Ribs and All the Fixings 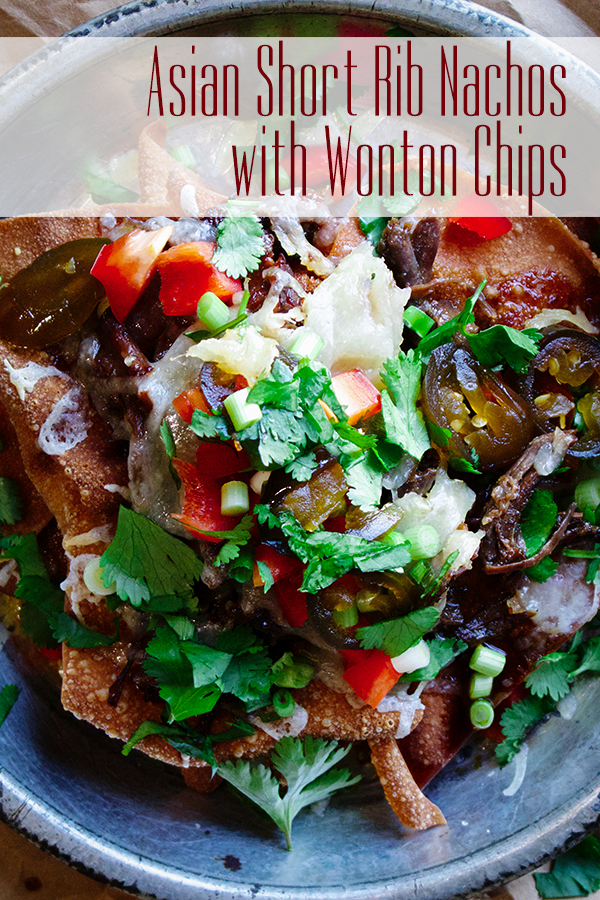 Asian Short Ribs are my latest obsession. I've been making them on the regular and putting the meat in everything - lasagna, rice bowls, pasta, sandwiches, omelettes, tacos - and nachos. The meat is meltingly tender and packed with flavor.

And yes, short ribs are on the pricy side. But, they are so rich that you can get away with a much smaller amount of meat per person than most other cuts.

Cooking short ribs in the slow cooker or low and slow in the oven is the way to go. The long cooking time renders the meat so tender it literally falls off the bone and the sauce gets all rich and velvety. When possible, I like to cook the short ribs at least 1 day in advance, separating the meat from the sauce and storing both in the refrigerator.

This allows the excess fat to separate from the sauce so that you can easily scoop it off. Short ribs are on the fatty side, and having too much fat in the sauce makes them overly rich. If cooking the meat in advance doesn't suit you, just let the sauce sit undisturbed for 10 or 15 minutes, then skim as much of it from the top as you can.

Because the meat is drenched in sauce, it will keep warm for hours in the slow cooker or in a warm oven, making it PERFECT for entertaining. 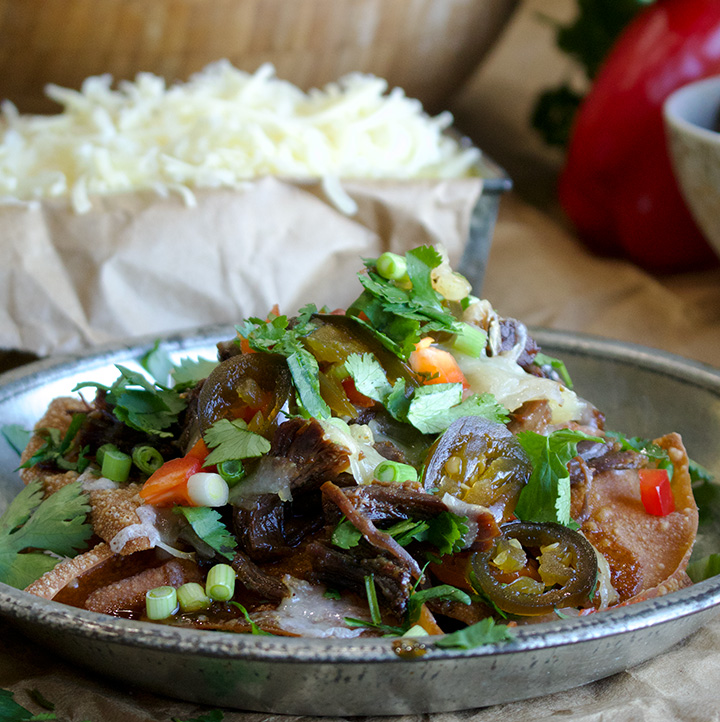 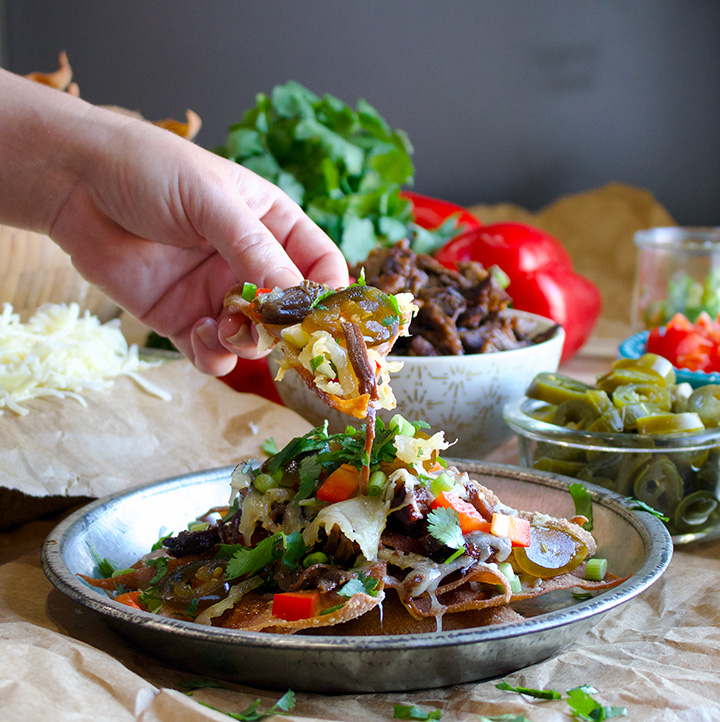 I am a "do ahead" kind of hostess. When I host a party - regardless of whether we're expecting 100 people or 5 - everything on the menu (mostly) must lend itself to advance preparation. We've hosted large graduation parties, dinner parties for 30, brunch for 50, and everything in between. Whatever the occasion, I don't want to be stressed out or stuck in the kitchen for the whole party.

I like to enjoy my own party. So, if it can't be made ahead of time, it doesn't make the menu. I have other requirements...

Food for a party should be somewhat adaptable to personal tastes and dietary needs. I always make too much, so leftovers must freeze well. If it's for an open house type of party, where people will be coming and going over the course of a few hours, I want the food to be something that can either be kept warm for hours, or can be reheated in small amounts as needed. Finally, the recipe(s) must be easy to scale up or down depending on the number of expected guests.

These Asian Short Rib Nachos are checking all those boxes for me.

✔Every component can be prepared days in advance

✔Is adaptable to personal tastes and dietary needs

✔Short ribs can be kept warm in a slow cooker for hours, or reheated in small amounts 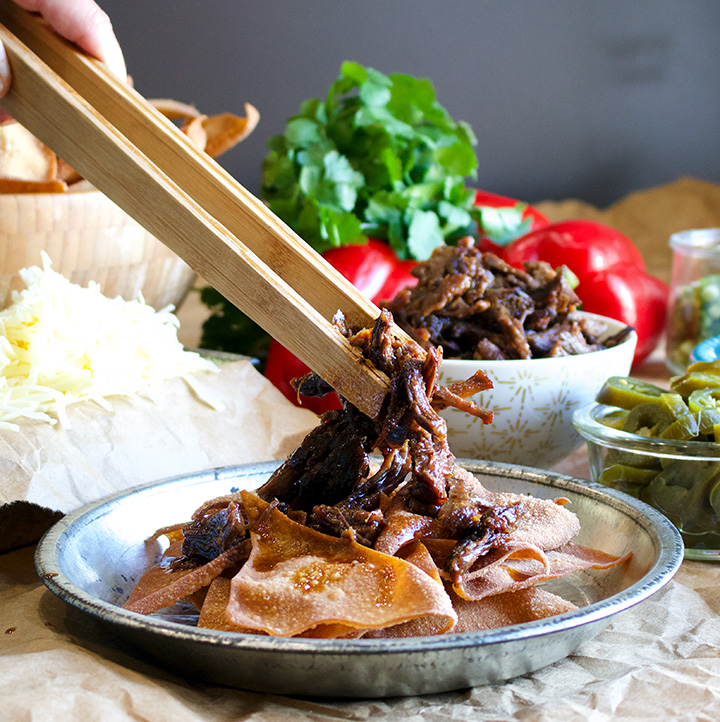 Making chips with wonton wrappers is a revelation to me. They are lighter and crisper than tortilla chips and, dare I say, more flavorful. They cook super quick - only a few seconds per chip - and don't even need to be sprinkled with salt. Even better, kept in an airtight container, they'll keep for several days before going stale.

Do your best to keep the temperature of the oil close to 325 degrees when frying; a thermometer will make that much easier. 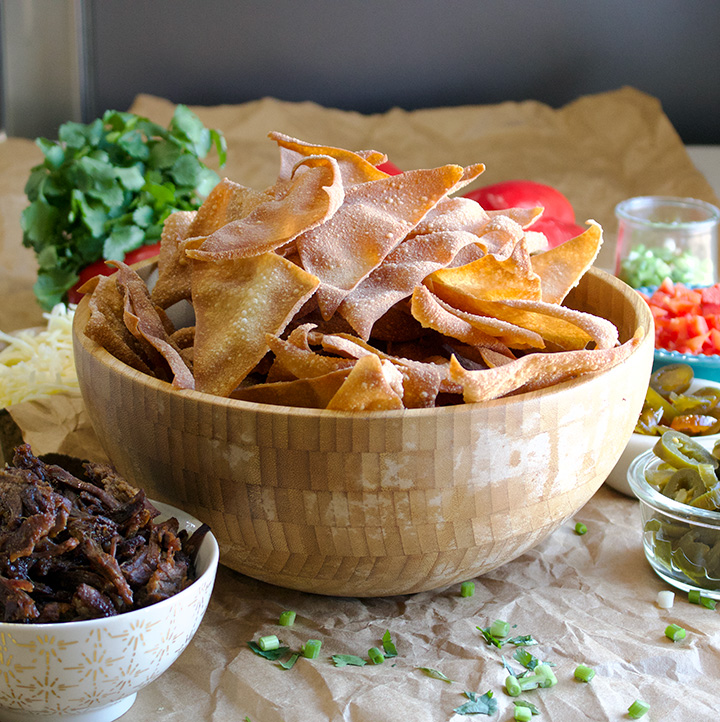 What is a nacho bar without plenty of options for piling on? This recipe calls for sharp white cheddar cheese, diced red pepper, scallions, cilantro, and pickled jalapeños. If you can find candied jalapeños, which are both sweet and spicy and complement the meat exceptionally well, all the better.

I usually put out 2 or 3 different types of pickled jalapeños ranging from mild to spicy, and let everyone pick their own poison. If you want to go crazy with the toppings, consider sautéed mushrooms, pickled onions, or very thinly sliced radishes.

I like to let each person build their own plate of nachos. Guests can add as much meat and cheese as they like, then melt the cheese in the microwave or in a preheated oven, and let them go to town on the toppings 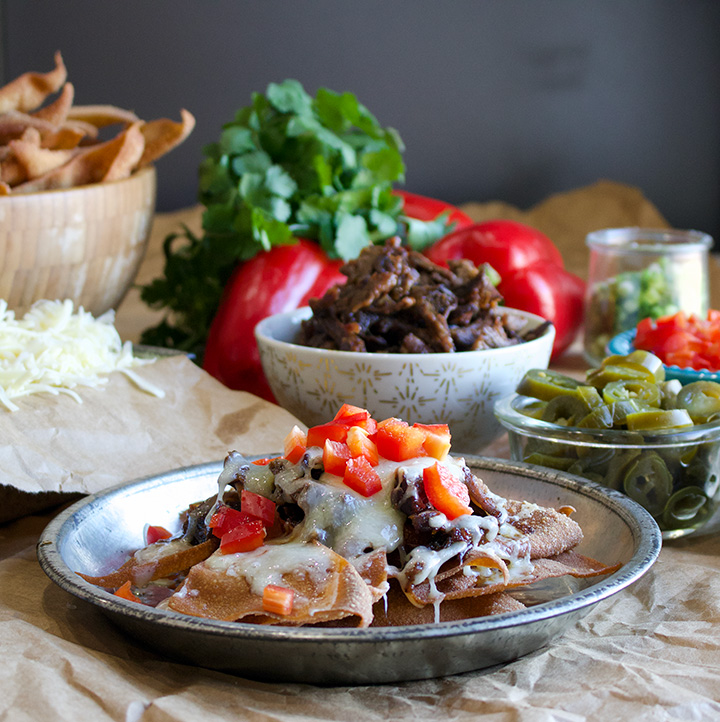 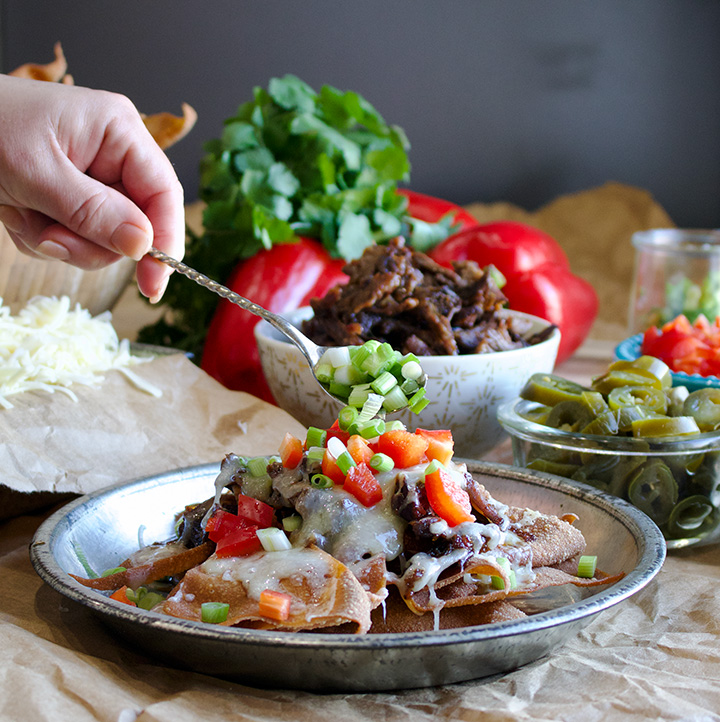 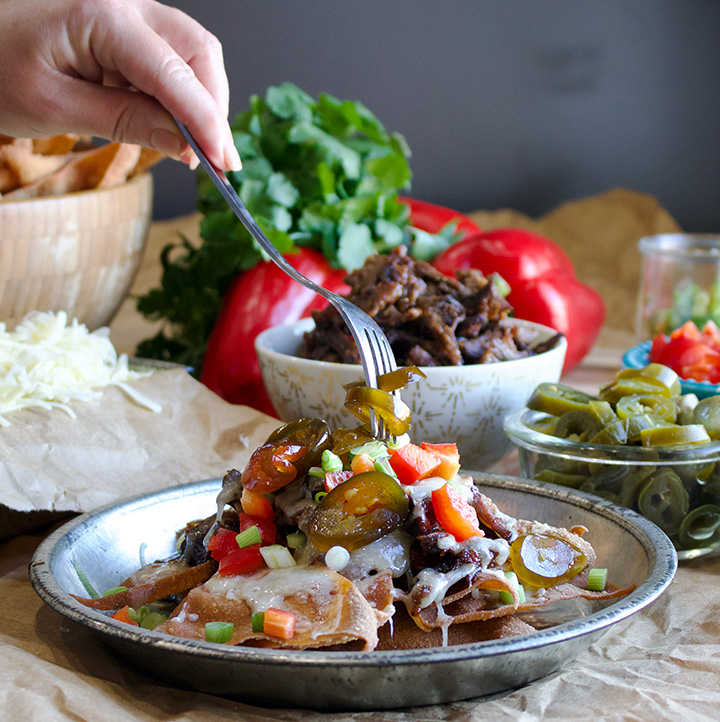 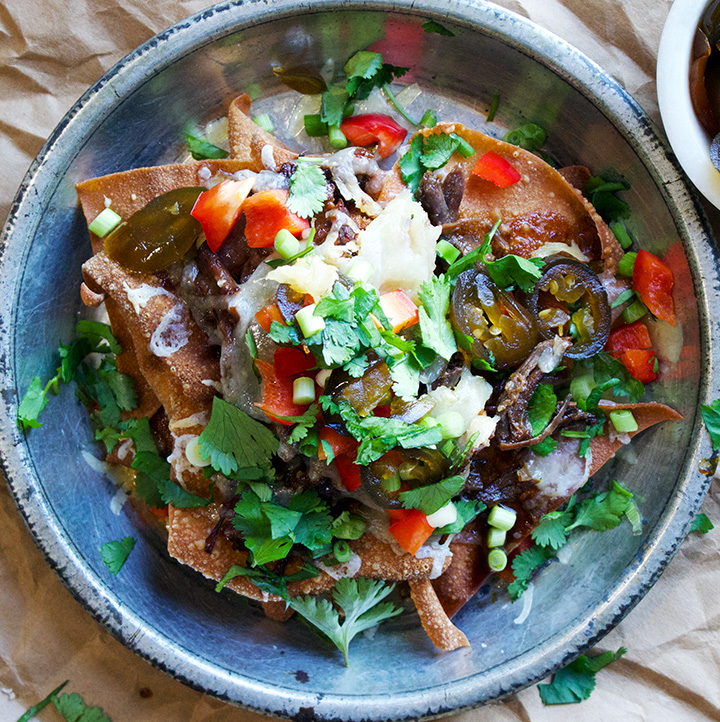