This creamy black bean soup is all about layer after layer after layer of FLAVOR. It's spicy, smokey, and savory with hints of sweet and sour. It's filling without weighing you down, decadent and nutritious, and the kind of vegan food that could please even the most dedicated meat eater.

The soup comes together in under an hour and will keep well in the refrigerator for days. In fact, it might be even better the next day. 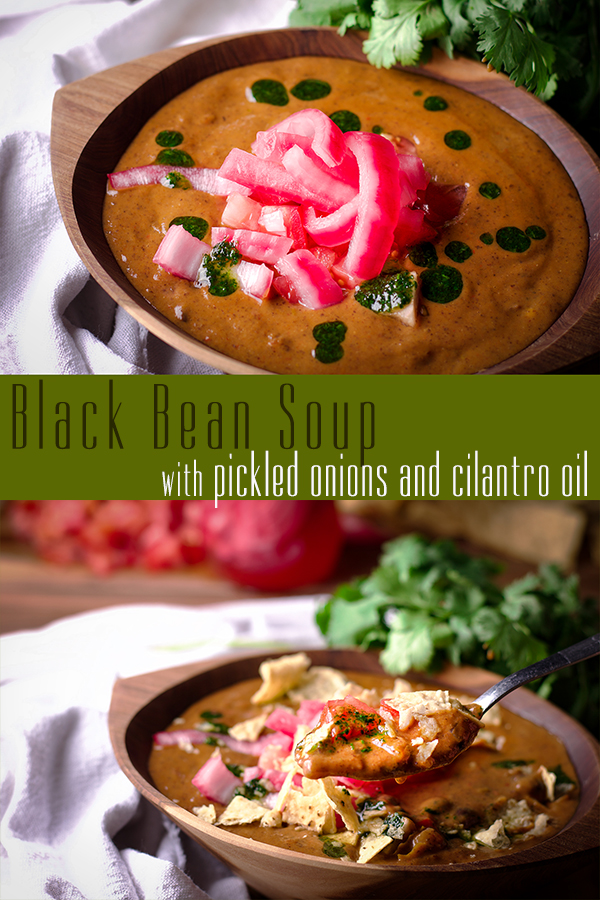 What is Urfa Pepper?

Urfa Pepper is one of my current obsessions. It's a dark red Turkish chili pepper with a gorgeous savory-sweet-smokey and slightly sour flavor that adds a remarkable amount of flavor and complexity to food. The pepper is named after the town of Urfa, which is located in southern Turkey, close to the Syrian border.

For many of us in the US, Urfa Pepper might be a new discovery. But, in Turkey its been grown for hundreds (maybe even thousands?) of years. Peppers in general are a big part of Turkish cuisine, having had a prominent role in curing meats and pickling for centuries.

Fresh Urfa Peppers have a shape somewhat similar to poblanos peppers. They are harvested when they turn bright reddish-orange then dried in the sun until they are a deep burgundy. The interesting thing about the drying process is that, unlike Mexican-style chilies, Urfa Peppers are covered at night with fabric or plastic. This process, called "sweating", ensures that the peppers retain some of their natural oils. Even after the pepper is ground, it feels slightly damp and oily, impacting both the flavor and the texture.

The flavor of Urfa Pepper is spectacularly complex. It has remarkable depth and just the right amount of heat. It's a little bit sweet, a little bit sour, and carries a smokiness that's the result of the drying process. The balance between sweet-savory-sour-smokey makes it the kind of spice that will elevate pretty much anything you want to add it to. And trust me. You'll want to add it to everything.

In reading through Turkish recipes, it is often combined with cumin seeds and onion. And, that's what I've done here, in this black bean soup.

In this recipe for Black Bean Soup, Urfa Pepper is added to sautéed onions and red bell peppers along with ground cumin, a pinch of sugar, and some tomato paste. The combination is a simple, easy way to add layers of flavor to the base of this soup, making it so much more interesting than your standard bean soup.

Where can you find ground Urfa Pepper? I almost always order it from Amazon and this is my favorite brand. 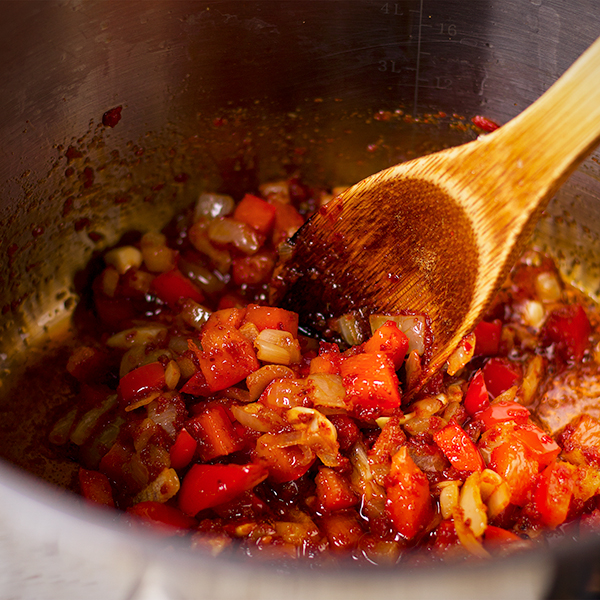 This soup is delicious with canned beans, but from scratch is even better.

Cooking black beans from scratch is seriously one of the easiest things. It takes some time, but so little of it is hand's on. Simply put the beans in a large pot or slow cooker along with some water and spices, and just let them get happy for a few hours.

The best thing about cooking dried beans is that you have the opportunity to add herbs, spices, garlic and onions to them while the cook, infusing the beans will all that flavor. Also, the texture of cooked dried beans is much, much better than anything that ever comes out of a can.

So, whenever possible, plan ahead and cook a pot of dried black beans for this soup. It's well worth it.

Having said that, using canned black beans is perfectly fine and will still result in a delicious black bean soup.

The toppings for this soup are where it's at!

Just like my favorite Vegetarian Chili Recipe, the toppings for this black bean soup elevate to a whole new level of delicious. Here's what we've got going on here:

#1. Cilantro Oil. Cilantro oil is simply fresh cilantro that's allowed to simmer and soak in extra virgin olive oil and is then pureed in a blender or food processor. I like to use my Cuisinart Mini-Processor for this task because the small bowl makes blending small amounts of ingredients so much easier.

So, why make cilantro oil instead of simply tossing a few fresh leaves of cilantro over the bowls of soup? Cooking the cilantro briefly both concentrates and smooths out the flavor. Fresh cilantro can have a "sharp" taste. Much of the time, I love that bright, sharp flavor. But, in this soup, I thought that the smooth, creaminess of cilantro oil would be a better fit. 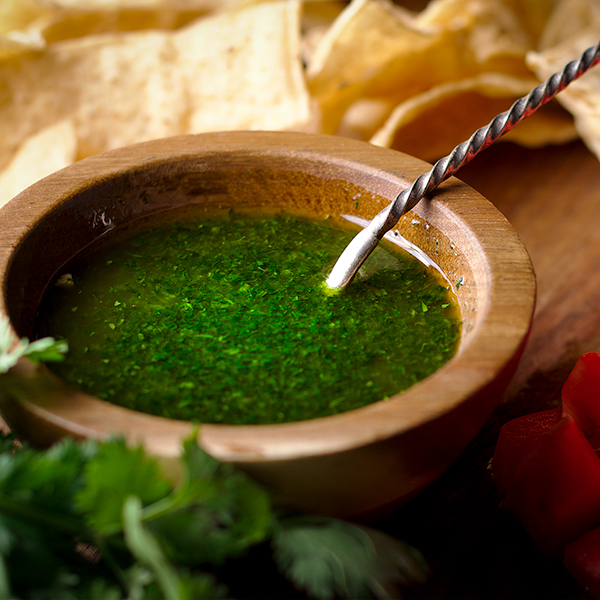 #2. 30-Minute Pickled Onions. Homemade pickled onions only take 30 minutes to prepare and will last for weeks. They are magical on pizza, sandwiches, salads, tacos, nachos, and should make a regular appearance on cheese boards everywhere. In this soup, they add a vinegary freshness that is simply spectacular when combined with the smokey richness of the pureed black beans. 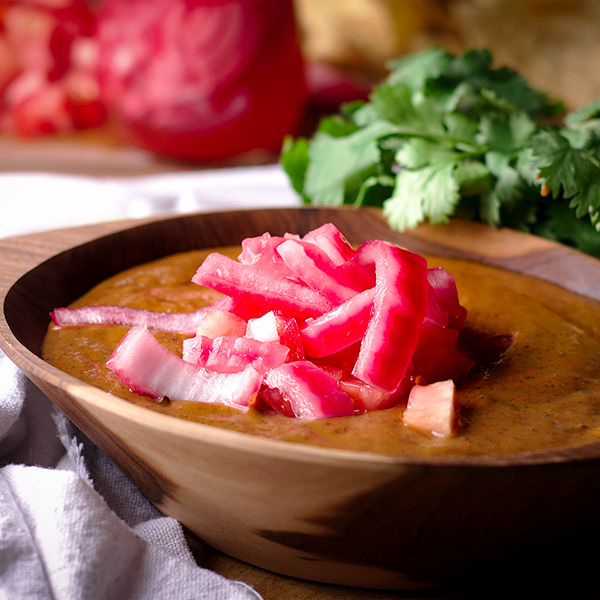 #3. Chopped Fresh Tomatoes. Just like the pickled onions, a few fresh tomatoes in this soup give it a bright, fresh flavor that contrasts beautifully with the spicy, smokiness of the black beans and Urfa Pepper. It's important that the tomato you use is ripe and flavorful.

One thing I want to say about fresh tomatoes is that they simply MUST be ripe and in season, or they aren't even worth using. If tomatoes aren't in season, or if the ones available to you are bland and flavorless, I'd suggest leaving them out. The other alternative is to use cherry or grape tomatoes which tend to be flavorful even when regular tomatoes are not. 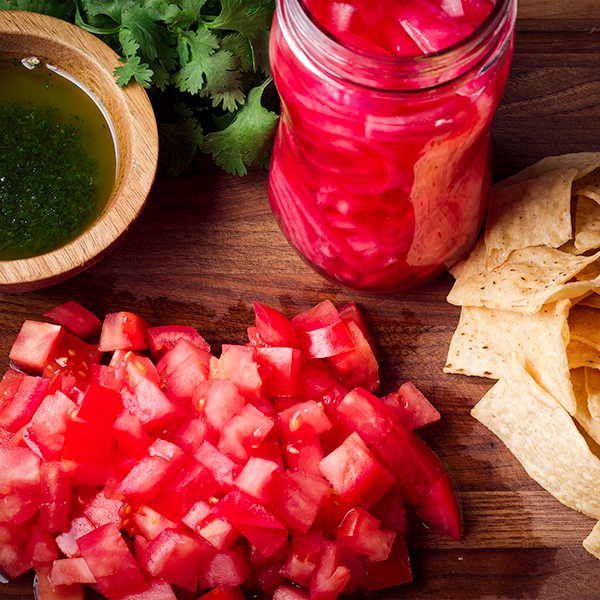 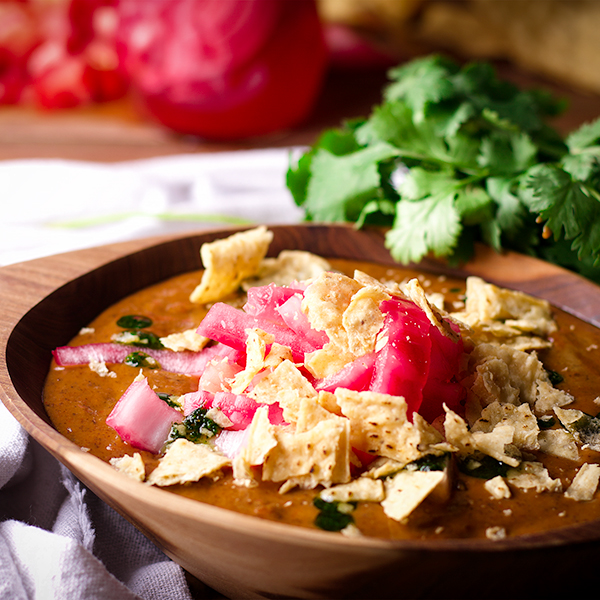 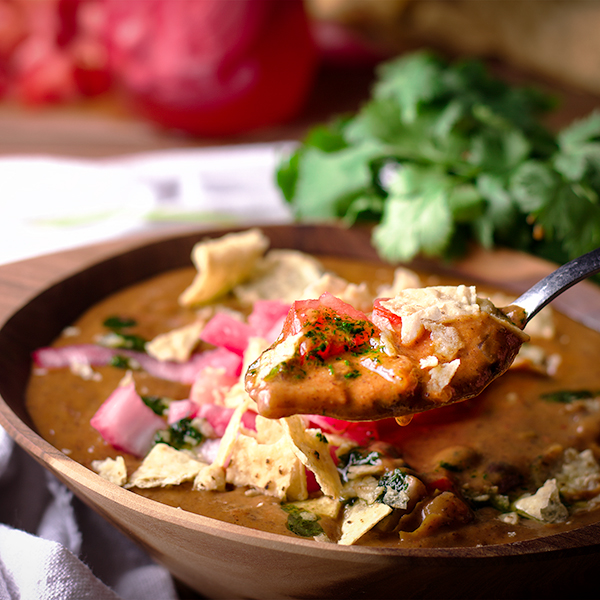 For the Cilantro Oil:

Urfa pepper has a moderate heat level that can vary a bit from jar to jar. When fresh, Urfa peppers are mild, but the heat level intensifies during the drying process. Taste your pepper to see how spicy it is and then add as much or as little as you like according to how spicy you like your food. I recomend a minimum of 2 teaspoon in order to take advantage of the flavor.

For Christmas last year, my mom got me a Cusinart Mini Food Processor. My husband and I were planning to move into an RV and she thought it would take up less space than my regular size food processor. At the time, I honestly thought I wouldn't use it. How wrong I was! Having since moved into the RV, I love how little space the mini processor takes up. But, I started using it before we even moved into our tiny home on wheels for things like this cilantro oil because having a small bowl makes blending a small amount of ingredients so much easier. I highly recomend having one whether your kitchen is tiny or gigantic.