Black Bean Tostadas made with simple black refried beans and enchilada sauce, corn salsa with roasted poblano peppers and fresh tomatoes, a drizzle of enchilada cream, and a crumble of queso fresco. 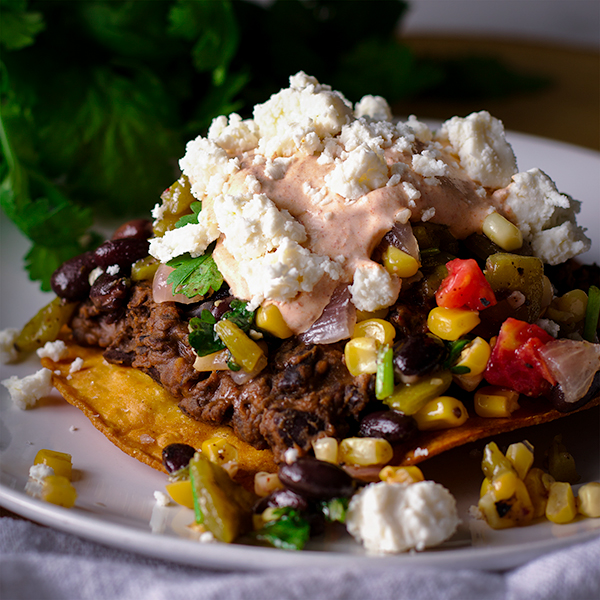 Tostadas, like tacos, are simply a vehicle for creativity and personal taste, even if that means using up all those odds and ends in your refrigerator. This Black Bean Tostada recipe begins with a tostada shell covered in a layer of refried black beans and enchilada sauce. Top the beans with a generous amount of fresh corn salsa, a drizzle of enchilada cream, and a crumble of queso fresco.

And, really, that's all you need.

But, you could also chop up that bell pepper rolling around in your vegetable drawer and toss it into the salsa. Or dice up that mango that's threatening to over ripen if it doesn't get eaten. Got a spare bunch of green onions? A few cherry tomatoes and some sautéed cauliflower? Chop them up and toss them right into the corn salsa. Want to use some pepper jack or sharp cheddar instead of queso fresco? Go for it.

Whatever odds and ends you've got in your refrigerator, these black bean tostadas are a great way to use them up.

If you're making these as a part of Summer Meal Plan #3, half of tonight's meal is already cooked, prepped and ready. In your refrigerator, you should already have a few cups of slow simmered black beans, a bowl of homemade enchilada sauce, a few cups of blackened corn, and some roasted and diced poblano peppers because you're a meal prep ninja. 🙌

If you're NOT making these black bean tostadas as a part of a meal plan, and don't happen to have some already prepped ingredients in your refrigerator, you can make these entirely, or partially with convenience foods. How much, or how little, of these tostadas are "from scratch" is entirely up to you. 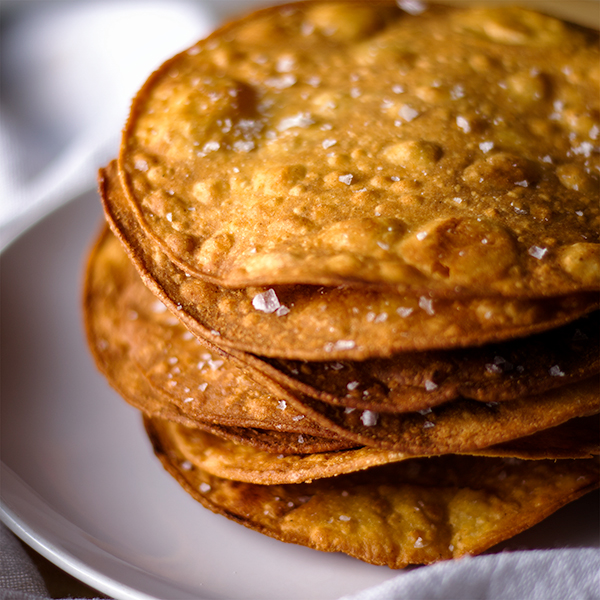 I love recipes in which I have choices about what "from scratch" actually means.

Homemade tostada shells are the perfect example of a food that can be made completely from scratch or just partially so. If you're in an all-or-nothing kind of mood, start with a bag of masa and roll out a few corn tortillas. (Also, if you're making homemade tortillas, can I please come for dinner if I promise to bring margaritas???)

Homemade corn tortillas are incredibly delicious, especially when eating something that allows you to really experience the texture and flavor of a fresh tortilla - like a taco. For me, if I'm frying the tortillas to make tortilla chips or tostada shells, I rarely feel that it's worth it to start with a homemade tortilla.

For one, after frying them up you can barely taste the difference between a homemade tortilla and the standard supermarket prepared variety. Second, super fresh tortillas are actually more difficult to get crispy than ones that are a day or two old.

However, I absolutely positively think it's worth it to start with a package of good quality corn tortillas and fry your own in lieu of picking up a package of already prepared tostada shells. Frying a tostada shell only takes a few minutes and creates a sturdy, crispy, salty base for all those delicious toppings.

Black Refried Beans - Homemade or from a can? 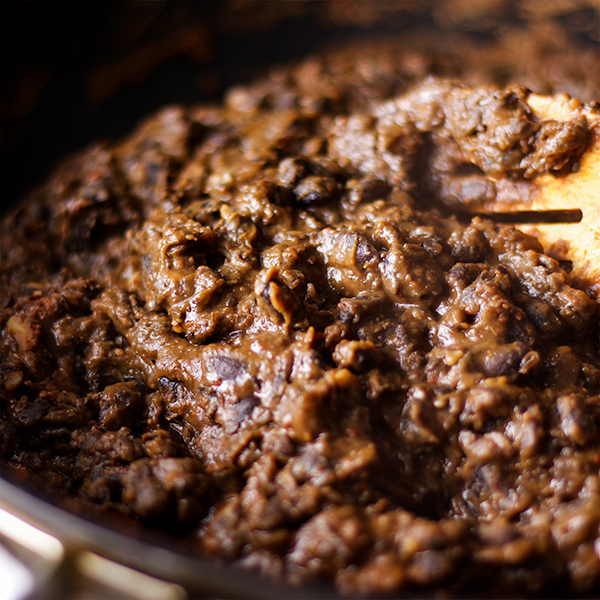 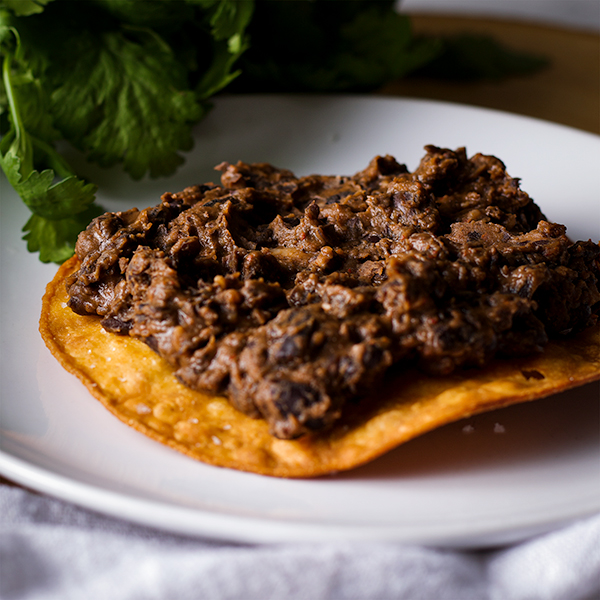 Once again, you have a choice about how "homemade" your refried black beans actually are, if at all.

Whenever possible, I like to start with dried beans, and make black refried beans completely from scratch. The process of cooking homemade beans requires little more than the foresight to soak the beans and put them in a slow cooker.

I'm not even exaggerating a little bit when I say that the total hands on time for a delicious, creamy pot of beans is about 10 minutes. And they are SO. MUCH. BETTER. than anything you're ever going to get from a can.

Without a doubt, homemade beans are one of those things that are nearly always worth it. Soak dried beans overnight in the refrigerator in a bowl of water. In the morning, put them in a slow cooker with a handful of herbs and spices and just let them do their thing. In a few hours, you'll have the creamiest, most flavorful beans ever. Infinitely better than anything you'll ever get from a can.

It goes without saying that starting with better tasting beans will give you better tasting refried beans. And, again, the process of "refrying" beans is an under 10 minute commitment. This is not a major project, friends. I'm not sure it qualifies as a project at all, even a small one.

So, while having a can or two of beans in the pantry is a godsend on those nights when you haven't given dinner a single thought before the moment when everyone is hungry, making beans from scratch is supremely rewarding and worth the minimal effort whenever possible. Just make sure they are high quality beans, like Amy's Organic Refried Beans. 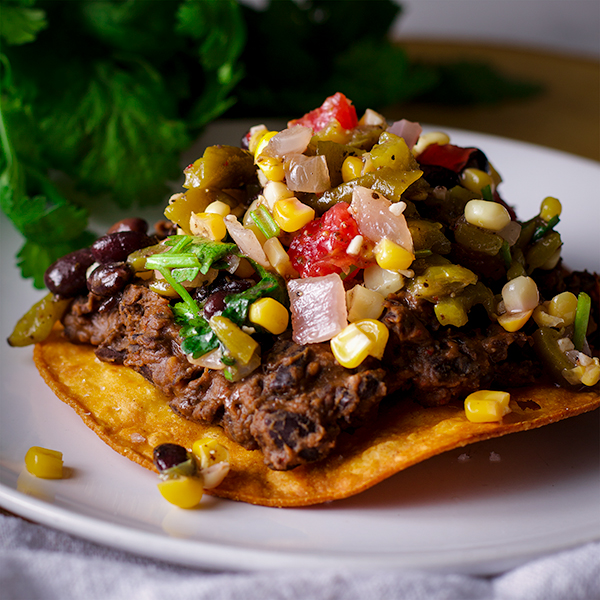 In late summer, when sweet corn and peppers are at their peak, fresh corn salsa is one of my absolute favorite things to make. This recipe calls for roasted poblano peppers, onion, garlic, tomato, cilantro and more black beans.

But, please use the recipe as a loose set of instructions - follow them exactly, or toss in any and all ingredients that sound good to you or that you want to use up before they go to waste. 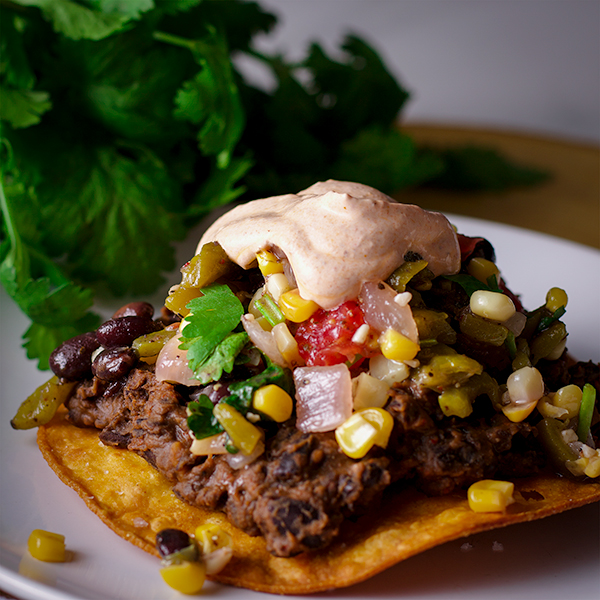 Queso fresco is a light, fresh Mexican cheese that's the perfect complement to dishes that include a lot of other fresh, spicy flavors because it doesn't overpower them. I love it enough to eat it all by itself, but it really is the perfect cheese to crumble over tacos, tostadas, or enchiladas because it adds a rich creaminess without weighing food down or taking over.

Once again, the term enchilada sauce from scratch is relative here. My version of homemade enchilada sauce involves starting with frozen enchilada puree. It requires very little hands-on time but is absolutely kick-ass. In a good way.

The recipe makes quite a bit - much more than you'll need for these tostadas. That is a beautiful thing because it means you can make some enchiladas. Or, Stuffed Poblano Peppers. Or, Southwest Summer Corn Chowder. Or, Chicken Tortilla Soup.

Or, simply freeze the leftover enchilada sauce for later.

Or, pick up a can or a jar of prepared enchilada sauce. Just do your best to select a quality brand. Also, if you open up your jar of enchilada sauce and it's fairly runny and a bit bland, simply pour it into a saucepan, add some oregano, cumin, salt and a pinch of sugar, and let it simmer for 10 or 15 minutes to reduce.

Black Bean Tostadas made with simple black refried beans and enchilada sauce, corn salsa with roasted poblano peppers and fresh tomatoes, a drizzle of enchilada cream, and a crumble of queso fresco.

For the Refried Black Beans:

For the Corn Salsa:

For the Enchilada Cream: 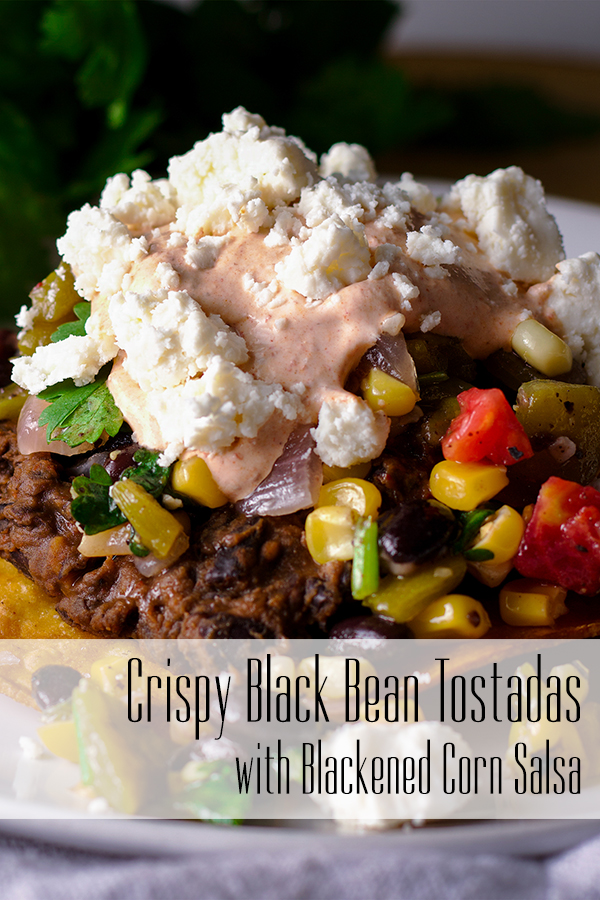