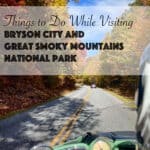 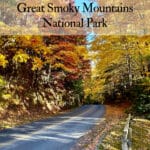 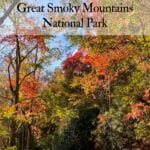 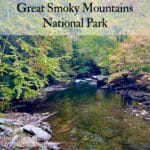 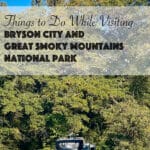 Bryson City is a small town in North Carolina that's often referred to as the Gateway to Great Smokey Mountains National Park.

We spent all of October and the first week of November at Big Bear’s RV Park in the Deep Creek Valley of Bryson City, which is perfectly situated just a mile from the entrance to the National Park.

First of all, let me say that October in the Smoky Mountains is as spectacular as you might expect.

We first fell in love with the area on a motorcycle trip in July of 2018 and decided then and there to come back to the area to see the leaves in the fall.

They did not disappoint.

Bryson City has a population of around 1500 people and is just a little over an hour west of Asheville, North Carolina; about two hours from Knoxville and Chattanooga, Tennessee; and three hours from Atlanta, Georgia and Charlotte, North Carolina.

In the 5 weeks we spent here, we discovered many fantastic things to do in Bryson City, throughout the Great Smokey Mountain National Park, and in the surrounding areas.

These are our top recommendations.

6 Things to Do While Visiting Bryson City

We were fortunate to book our train tickets on a week when the fall leaves painted the North Carolina Hills in a thousand shades of green, amber, crimson, and carmine.

We chose to ride in one of the open air cars, a decision I was nervous about but that turned out to be ideal.

The railroad offers several different options including full service dining cars (first class), crown class, coach, and open air. The open air cars are “no frills”. No one comes around to take your drink or food order, seating is first come first serve, and the atmosphere is very casual. The cars themselves were created from retired baggage and flatbed cars and feature long padded outward-facing seats, and open air windows.

The train depot is also home to the Smoky Mountain Trains Museum which includes collection of model trains, children’s activities, and gift shop. Complimentary admission is included with a train ticket.

Our daughter Annie was visiting us the week we rode the Great Smoky Mountain Railroad. She was recovering from hand surgery, hence the bandaged arm, but that didn't stop her from enjoying the ride.

In the photo below, Steve and Annie stand in front of the 1942 steam engine that powered our journey. The engine’s construction was an officially commissioned WWII Steam Engine plan. It is of the world’s largest engine class and is one of two remaining in the United States.

For all you history buffs, the Swain County Heritage Museum includes exhibits, photos, and information about early settlers, the creation of the Great Smoky Mountains National Park and the Fontana Dam. The museum is located in the 1908 historic courthouse in downtown Bryson City.

If you’re in need of fresh produce while in Bryson City, Darnell Farms and Jimmy’s Produce are worth the visit.

Darnell Farms has a lot going on including special events and festivals, hay rides, a corn maze, and a huge shop with plenty of produce and other specialty items.

Jimmy’s Produce is a much smaller shop that still has a fantastic selection. It’s where I purchase all our fresh produce during our 5 week stay in the area. The quality of everything I purchased was so good I wish I could pack the little shop up and take it with us.

There is also a farmers market every Friday and Saturday morning from May through October in downtown Bryson City.

Nantahala Outdoor Center is a multi-activity base camp of sorts in Nantahala Gorge from where you can where you can go rafting, kayaking, zip-lining, biking, and hiking. The campus also includes two restaurants/ snack shops and a gear shop.

For kids, there is a fun outdoor climbing structure that was the first 100 percent net-based aerial playground in the United States.

Oconaluftee Indian Village is set in 1760 and designed to showcase traditional Cherokee dwellings, rituals, dances, and crafts. Guided tours take you through Cherokee lifestyle and history with demonstrations and historical Cherokee people.

Fontana Lake is a reservoir on the Little Tennessee River located at the southern border of Great Smoky Mountains National Park. Bryson City is near the eastern end of the lake.

The 17 mile long man-made lake is impounded by Fontana Dam and when it was completed in 1942, the lake submerged several little towns. Each winter, the Tennessee Valley Authority lowers the lake level 50 to 60 feet for spring flood control and to perform routine maintenance on the dam exposing remnants of the flooded communities.

Swimming, picnicking, boating, and kayaking are all popular activities and there are several public areas with restrooms, boat access, and picnic tables. You can even rent a floating house!

If you visit Smoky Mountain National Park, here are 3 must-see places to include in your itinerary:

Clingmans Dome is the highest peak in the Great Smoky Mountains National Park and the third highest mountain east of the Mississippi River. A steep, half-mile hike will take you to an observation tower from which you can see over 100 miles on a clear day.

We visited Clingmans Dome on a Saturday and let’s just say we weren’t the only ones. There’s a large parking lot at the base of the hike to the observation tower, but after waiting in the massive line of cars moving at a snail’s pace on the way to the parking lot, we followed the example of others and parked on the side of the road and hiked our way in.

Despite the crowds, Clingmans Dome was 100% worth it. If you find yourself in Smoky Mountain National Park, it’s a must-see experience.

The Cataloochee Valley is one the most remote parts of the Great Smoky Mountains National Park. Annie and I spent an afternoon in Cataloochee Valley and I wish we’d gotten an earlier start on the day because it would be easy to spend an entire day, or even several days, exploring the area.

The drive into Cataloochee Valley includes a steep, 10-mile, curving mountain road that is quite rough and extremely narrow. BUT, the drive itself is spectacular and the valley is one of the most picturesque areas of the Smoky Mountains. It’s well worth the trip!

Archeological evidence suggests that the Cherokee Indians hunted and fished in this valley but did not settle here. Following the trails the Indians had made, white homesteaders moved into the valley in the early 1800s.

Several of their buildings are still standing and open to the public to walk through including the old schoolhouse and church. While it’s possible to drive to several of the old buildings, a few are only accessible by hiking to them.

Deep Creek Loop Trail is only a mile down the road from Big Bear's RV park so it was the trail we spent the most time on.

The trail includes wooden bridges over streams and several waterfalls. It was fun to see it change throughout October, with the leaves starting to change at the beginning of the month, to most having fallen by the time we left in early November.

Everything I read about this trail talked about how popular it is, but it wasn’t the least bit crowded while we were there.

In July of 2018, we rode the entire Blue Ridge Parkway, starting in Front Royal, VA, and ending in Cherokee, NC. We’ve wanted to go back ever since.

When planning our travel itinerary for this year, one of our primary motivators for spending the month of October in North Carolina was so we could spend a few days riding the Blue Ridge Parkway while the leaves were changing.

The road runs mostly along the spine of the Blue Ridge Mountains, a mountain chain that’s a part of the Appalachian Mountains. This means gorgeous views on both sides of the road for most of the drive.

It’s spectacular and remains one of our favorite stretches of road.

The Tail of the Dragon is an 11 mile section of US 129 in Tennessee with 318 curves. It’s a major destination for motorcycle riders and sports car drivers and attracts thousands of people each year.

We chose to ride Tail of the Dragon the first Saturday after we arrived in Bryson City. It was a gorgeous fall day, the leaves were changing, the sun was shining, and the temperature was in the low 60’s. Perfect riding weather.

But here’s the thing... we knew very little about Tail of the Dragon except that it was a famously curvy road in the Smoky Mountains of Tennessee.

What we learned is that on weekends the road is teeming with bikers and sports car drivers who want to complete the stretch as fast as they can. This is not really our style and created some stress.

Having said that, it was also fun. The road itself is spectacular, especially in the fall. There are several photographers who set themselves up in strategic places along the road and snap photos that you can view and order later. We don’t have any photos of the two of us on the bike, so this was fun!

Later in the month, we drove Tail of the Dragon in the truck because we were picking our daughters up from the Knoxville airport and it was, to our amazement, the best route to get there.

Our 23-foot-long dually truck felt way too big for the road, but it was late afternoon on a Monday and the road was blissfully quiet.

If riding Tail of the Dragon is on your bucket list, we say go for it, but plan accordingly.

If you love the idea of being in the thick of things, having your photo taken, and either going fast or patiently pulling over to allow fast drivers to pass, by all means, go on a weekend. If you want a more leisurely experience on the road, weekdays are your best bet, especially late afternoon.

The Road to Nowhere is, quite literally, a road that leads to nowhere. When Fontana Dam was built in the 1930s and 40s, thereby creating Fontana Lake, it displaced people who had been living in towns that were now submerged by water.

The road to several cemeteries was also underwater so the government set about building a new road so families would have access. However, environmental problems halted construction of the road and the project was never picked back up. So, to this day, the road ends at a quarter-mile tunnel that leads to a wilderness in the mountains.

Today there are several hiking trails at the end of the tunnel and, of course, plenty of ghost stories and folk lore.

What did we miss?

Have you visited Bryson City and Great Smokey Mountains National Park and would like to recommend something else to visitors? Please leave us a comment below and let us know!