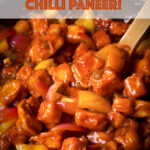 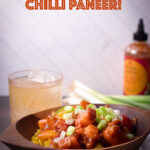 Chilli Paneer is an absolutely delicious Indo-Chinese dish that includes cubes of battered and fried paneer smothered in a savory, sweet, and spicy sauce made with soy sauce, vinegar, and chilli sauce.

Like Lentil Dal and Cauliflower and Chickpea Curry, Chilli Paneer is one of those warm and comforting vegetarian meals that feels both indulgent and nourishing all at the same time.

Paneer is a fresh cheese made from cow or buffalo milk that's commonly used in Indian cooking. The cheese is non-melting and has an almost meaty texture that makes it perfect for vegan and vegetarian dishes.

One of my favorite ways to cook paneer is in Chilli Paneer: battered and fried, and tossed into a salty, spicy, sweet sauce with some crisp-tender veggies.

I like to serve Chilli Paneer over Indian Rice, but you can use plain white rice, preferably basmati rice, if you prefer.

Ingredients Needed to Prepare this Recipe

How to Make Chilli Paneer

Make the batter by whisking cornstarch, flour, chili powder, salt, and pepper with water. Cut the paneer into 1-inch pieces and toss it around in the batter to coat.

Heat about an inch of oil in a skillet until very hot - about 360-370° F (182-187° C). Add the paneer in batches and cook until golden grown on all side. Let the fried paneer rest on a paper towel lined plate while you prepare the vegetables and sauce.

Mix the cornstarch and water in a separate bowl. Set both near the stovetop.

Pour the soy sauce mixture into the skillet and bring it to a boil. Then, whisk in the cornstarch slurry and cook, stirring constantly, until the sauce thickens.

Add the paneer to the skillet and stir everything around to coat it in the sauce.

Serve Chilli Paneer over Indian Rice (or any kind of cooked rice) with a sprinkle of chopped green onions.

#1. Placing the paneer in water will keep it from drying out.

As you cut the paneer into cubes, add it to a bowl of room temperature water to keep it from drying out. Paneer will keep well in water for up to 4 days as long as you change the water every day. So, once the panner is cut and in the water, there's no need to rush.

#2. Add only as much water as you need to the paneer batter.

The consistency of the paneer batter should be similar to pancake batter. You want it to be thick enough to really stick to the panner without being so thick that it's difficult to move the paneer around in the batter.

#3. Don't worry about pieces of panner getting stuck together in the pan while frying.

The batter is very sticky and some of the pieces of paneer will stick together as you lower them into the hot oil. Don’t sweat it. Separate them as you can and don't worry about the ones that stick together. You can separate them after they are done cooking.

In fact, having some of them sticking together makes them easier to turn.

Does using more oil in the pan make the paneer more oily? No. The battered panner will absorb the same amount of oil whether you use a little or a lot.

And, by the way, even though the battered paneer are fried, they don't taste oily at all.

Can this recipe be scaled up or down?

Yes! Although increasing the amount of Chilli Paneer you make depends largely on the size of your skillet. You can also make more Chilli Paneer by making two batches. Add both batches to a large stockpot and gently reheat over low heat right before serving.

This recipe can also be easily cut in half to make 3 servings instead of 6.

Can Chilli Paneer be prepared in advance?

Chilli Paneer is best eaten fresh, within a few hours of it's preparation. But, you can prepare it in advance and store it in the refrigerator for a couple of days. To reheat, add it back to a skillet and add a tablespoon or two of water. Heat it on low, stirring from time to time, until it's warm.

You can prepare some of the the individual ingredients in advance:

Cubes of paneer can be kept in a bowl of water in the refrigerator for up to 3 days if you change the water every day.

The vegetables can also be cut up to 3 days in advance and stored in a zip top bag or other container in the refrigerator.

The paneer batter can be prepared up to 1 day in advance and kept in the refrigerator in a covered container.

The soy sauce mixture for the Chilli Paneer sauce can be prepared up to 3 days in advance and kept in a covered container in the refrigerator.

What can I do with leftover Chilli Paneer?

One of my favorite ways to use leftover Chilli Paneer is to roll it up inside a tortilla, creating a delicious snack similar to an Indian street food called a Frankie or Roti Wrap.

Heat the Chilli Paneer on the stovetop over low heat or in the microwave and layer it in a flour tortilla along with a handful of dark leafy greens. Roll it up burrito style and devour.

You can also do the same thing with a pita, stuffing warm Chilli Paneer into the pocket.

Pin this recipe for later!

For the Breaded, Fried Paneer:

For the Chilli Paneer Sauce: