Nutty, chewy Pearl Couscous infused with the flavors of shallots, cinnamon, star anise, ginger, turmeric, and paprika, and tossed with roasted carrots, butternut squash, and Andouille sausage. This dish is warm, comforting, and intensely satisfying, especially throughout the winter and fall. 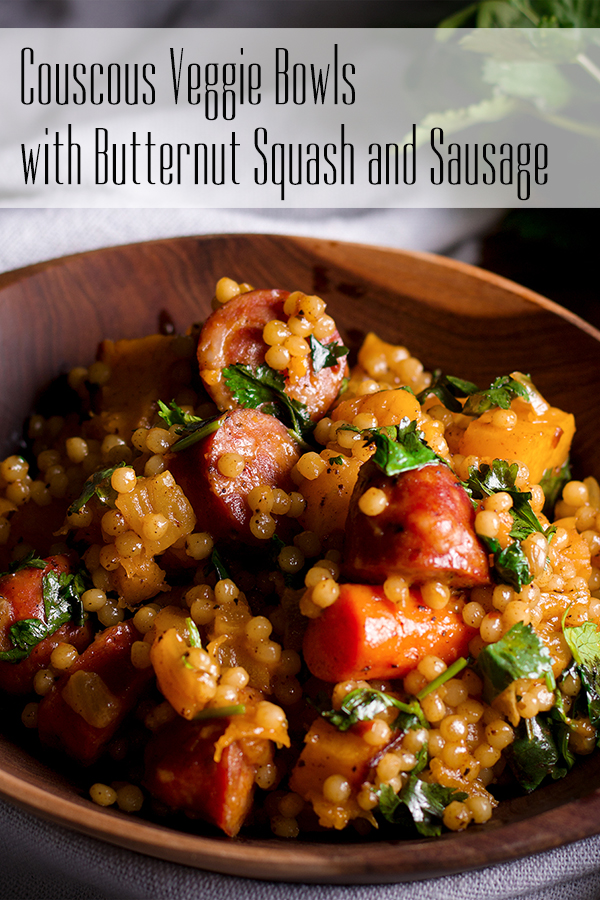 What is Pearl Couscous? And how is it different from "traditional" couscous?

Traditional couscous has been around for centuries and, while often classified as a grain, it's actually tiny pieces of pasta made from semolina wheat. Unlike most other varieties of pasta, which are rolled into sheets before being cut into shapes, couscous is made by rubbing semolina between wet hands until tiny little balls are formed and then dried.

Pearl couscous (also called Israeli couscous) is quite different. For one, it didn't arrive on the culinary scene until the mid 1900's. It's also a type of pasta made from wheat and semolina flour, but the granules are larger and pearl like. Pearl couscous is toasted instead of dried, giving it a slightly nutty flavor and chewy texture that I adore. 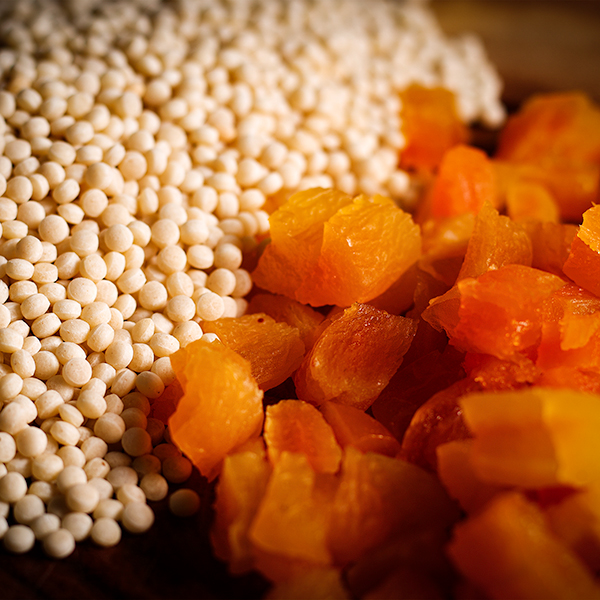 What is Star Anise? And is it the same thing as Aniseed?

Star anise is an earthy, subtly sweet spice with a slight licorice-like aroma. Right off the bat, I want to say that I absolutely despise the taste of black licorice but still love the flavor that star anise imparts to most dishes. So, if you're a fellow black licorice hater, hang in there with me.

Star anise has a "warming" flavor that reminds me of spices like cinnamon, cloves, and nutmeg. It's an essential ingredient in Chinese Five Spice powder and used to flavor a variety of other dishes from duck to roast pork to pho and Indian biryani. You can even use it to flavor pumpkin pie.

Despite having similar names, star anise is not the same thing as aniseed. Anise comes from a plant that belongs to the same family as carrots, celery, and parsley. The seeds look similar to fennel seeds and, like Star Anise, have a sweet licorice-like aroma and flavor.

Star Anise is actually the fruit of a small evergreen tree. The fruit is picked before it's ripe and then dried until it's hard, dark brown, and resembles a star.

In this dish, star anise combines beautifully with cinnamon, turmeric, ginger, and paprika, to create a warm, aromatic, complex flavored broth that is a delicious compliment to butternut squash, carrots, and spicy andouille sausage. 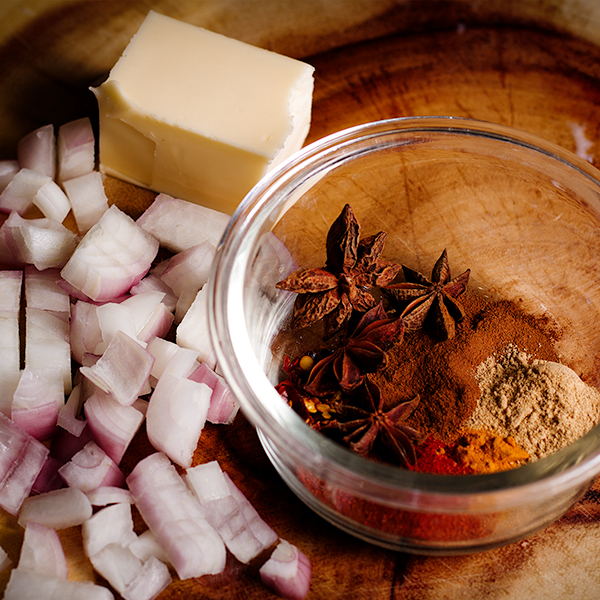 Why add wine to a dish if you're only going to let most of it evaporate?

Alcohol helps to bring out the flavors in food through two processes -  evaporation and molecular bonding. Because alcohol molecules evaporate quickly, they are swift conductors of aroma. For example, if you add a splash of rum to caramel sauce (hello, caramel rum sauce), you'll find that you can not only smell the rum itself, but that the aroma of the caramel is intensified.

However, the aroma enhancing effect of alcohol works best when a dish contains a low concentration of  alcohol - approximately 1 - 2% (or less). When more than 2% of a dish is alcohol, the scent of the alcohol will start to dominate. In some cases, this is desirable, especially in desserts. But in most savory dishes, alcohol should act as a silent conductor of flavor and scent.

The other important thing that alcohol does in cooking is bond with both fat and water molecules, distributing flavor throughout a dish more evenly.  This allows us to smell and taste all the flavors in the food with more intensity that we could otherwise.

In this dish, ½ cup of white wine is added directly to the aromatics, herbs, and oil so that it can bond to all those compounds and intensify their flavors. However, the goal is NOT to end up with a bowl of couscous that tastes like wine. Allowing the wine to evaporate creates a situation in which the flavors of shallot, cinnamon, star anise, ginger, turmeric, and paprika are stronger and more evenly distributed while the taste of the alcohol itself becomes undetectable. 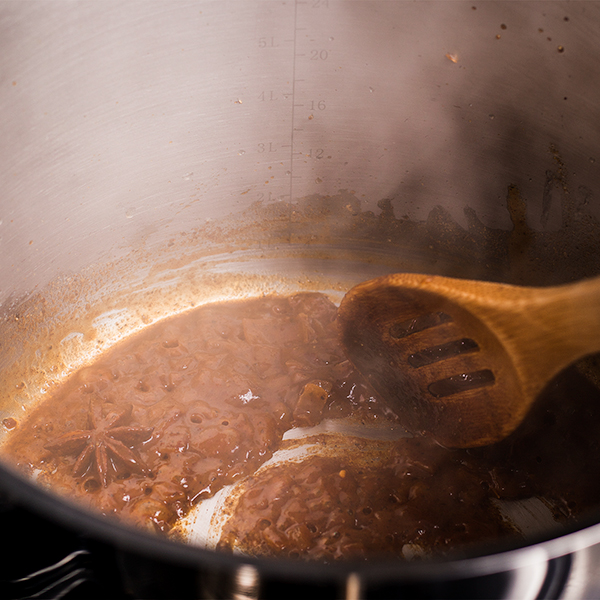 How to Peel and Chop Butternut Squash

Instructions in a recipe to "peel and chop" a butternut squash can make the whole process sound deceptively simple. But, if it's something you've never really done, you can find yourself staring at the hard shell of a butternut squash wondering how exactly you are supposed to peel it, let along chop it.

The thing that's most important here is that you start with a sharp knife. If you do that, the process really is quite simple. A set of good quality knifes is a beautiful thing. But, honestly, you can go a long way with a mediocre knife as long as it's sharp.

A good knife sharpener is key. I have the Mercer Double Diamond Sharpener and absolutely love it. But, there are a wide ranch of options out there and the only truly important thing is that your sharpener actually gets your knifes sharp. 🙂

If you're working with a dull knife, I'm going to warn you right now that you're going to need to put some serious muscle into the task because the outer shell of a butternut squash isn't messing around.

#1. Start by cutting off both ends of the squash. Then, cut it in half lengthwise and crosswise, so you have 4 pieces.

#2. Use a spoon to scrape out all the seeds and as much of the stringy innards as you can.

#3. Stand one of the four pieces on end and slice off the peel. 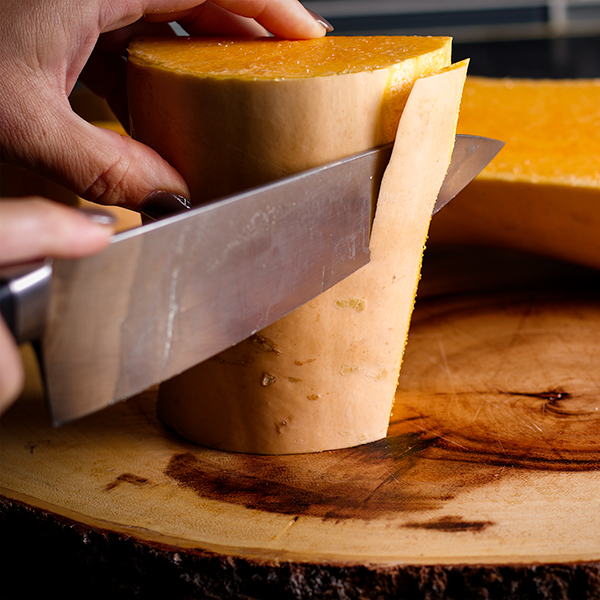 #5. Slice each quarter into long pieces that are approximately 1-inch wide. 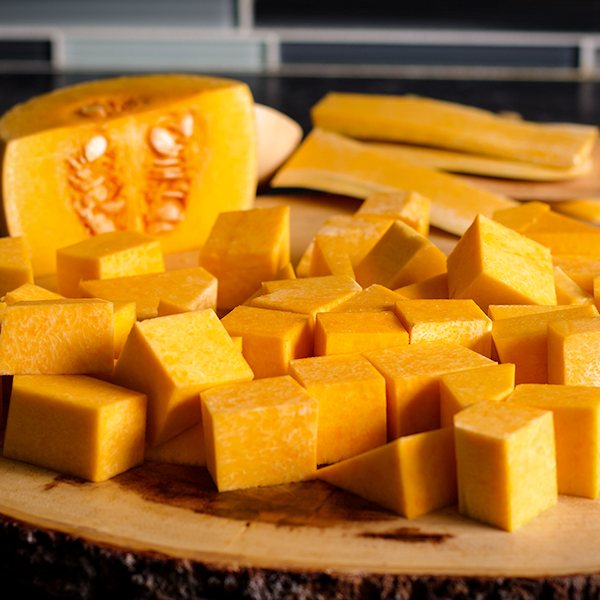 Recommended tools and ingredients for this recipe:

As an Amazon Associate I earn from qualifying purchases.

> BROWSE ALL BOWL AND SPOON RECIPES 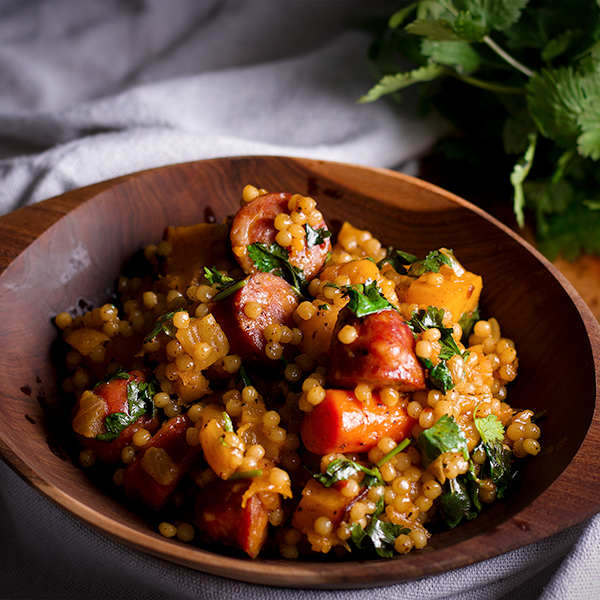 Meal Plans that Include this Recipe:

Nutty, chewy Pearl Couscous wrapped in the flavors of shallots, cinnamon, star anise, ginger, turmeric, and paprika, then tossed with roasted carrots, butternut squash, and Andouille sausage. This dish is warm, comforting, and intensely satisfying, especially throughout the winter and fall.