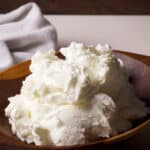 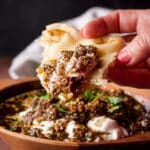 I discovered Labneh a couple of years ago and have been obsessed with it ever since. Labneh is a thick, creamy yogurt cheese that’s mildly tangy and one of the most versatile, delicious cheeses you can have in your refrigerator.

Labneh is a staple of middle eastern cuisine but can be difficult to find in many parts of the world. But, GOOD NEWS - it’s ridiculously easy to make yourself.

Whipping up a batch of homemade labneh requires less than 5 minutes of hands-on time. Then it's just a matter of summoning the patience to let it hang out in the refrigerator for a day or two before you dig in.

Labneh is essentially strained yogurt. It’s made by allowing the whey to strain out of yogurt until all that’s left behind is a delicious, soft spreadable cheese. It's thick and creamy with a mildly tangy flavor and about a million possible uses.

I think the first time I heard of labneh was while reading Shuk, one of the relatively few cookbooks that made the cut when we decided to become full-time travelers and move into an RV.

Shuk is all about the bright, bold, fresh flavors of Israeli cooking and makes use of labneh in several recipes because it's an essential part of middle eastern cooking.

Labneh can be used in place of cream cheese, as a sandwich spread, or (my favorite!) topped with crispy garlic and za’atar toasted in olive oil and eaten as a dip.

In addition to garlic and za'atar, you can top labneh with anything your heart desires - nuts, seeds, dried or fresh fruits, spices, chilies, herbs - and serve it with crackers, vegetables, a loaf of crusty bread or a stack of warm flatbread.

Ingredients Needed to Prepare this Recipe

You only need TWO ingredients to prepare homemade labneh:

The yogurt can be made from goat or cow's milk, but it should be full fat and of good quality. As the primary ingredient in Labneh, poor quality yogurt will make a difference in the final product.

The most difficult part about this labneh recipe is waiting. The actual hands-on time required is less than 5 minutes. After that, the yogurt just has to hang out in the refrigerator for a day or two.

(Alternatively, you can wrap it in cheesecloth and suspend it over the bowl by tying it to a wooden spoon.)

Fold a piece of cheesecloth so that you have 2 or 3 layers and set it inside the strainer.

It's important that the cheesecloth be large enough to drape over the sides of the bowl by several inches.

You can also use a muslin or linen towel if you prefer.

Stir a bit of salt into a container of yogurt and then scoop it into the cheesecloth-lined strainer.

Wrap the cheesecloth up and over the yogurt and then let it rest in the refrigerator for 24 - 48 hours.

While the yogurt hangs out in the refrigerator, the whey (a watery protein in milk) strains out of the yogurt collecting in the bowl. You're left with the thick, creamy soft cheese called labneh!

The longer you leave the yogurt to strain the thicker your labneh will be. 24 hours is really the minimum, but I usually prefer to let it strain for 48 hours.

What Can You Do With the Leftover Whey?

When you lift the strained labneh from the bowl, what's left behind is a cloudy liquid protein called whey. There are a lot of really great uses for whey, so don't pour it down the drain!

Whey can be used in to increase the amount of protein and flavor in all kinds of foods. Here are just a few ideas to get you started:

You can also pour whey into ice cube trays and freeze it for later.

How to Store Homemade Labneh

Stored in an airtight container, labneh will keep well in the refrigerator for up to 2 weeks.

If you want to keep it for longer than 2 weeks, form it into balls that are roughly 1 tablespoon in size and put them in a very clean container with a lid. Pour olive oil over the labneh cheese balls, adding enough to cover them completely. Put the lid on the container and store in the refrigerator.

Kept in olive oil, labneh will keep for up to 3 months. Remember that in order for the labneh to keep for that long, the balls must be completely submerged in olive oil.

You can also mix in herbs and seasonings (like chilies) before rolling it into balls. Then, whenever you like, simply scoop out a few labneh cheese balls, place them in a dish and add them to a mezze platter, cheese board, snack plate, or any small bite and appetizer spread.

How to Serve Labneh

So many options here! Labneh can be used in place of cream cheese, used as a sandwich spread, or (my favorite!) topped with crispy garlic and za’atar in olive oil and eaten as a dip.

Can I use Greek yogurt to make labneh?

Yes! You can use any kind of whole milk, full fat, plain, unsweetened yogurt to make labneh, including Greek yogurt. The most important part is that it's not skim, or reduced fat yogurt and that it's good quality.

Is Labneh cheese or yogurt?

Labneh is a soft cheese made from yogurt.

Do you have to refrigerate the yogurt while waiting for it to transform into labneh?

People in middle eastern countries have been eating labneh for thousands of years and most traditional methods for making it do not call for refrigeration. And, many people today make labneh by suspending the yogurt in a cloth over their kitchen sink.

So, technically, no. You do not have to place the bowl of yogurt in the refrigerator while waiting for the whey to drain out. Having said that, I always do. Yogurt transforms into labneh just as well in the refrigerator as it does at room temperature. So, for me, better safe than sorry (especially when it comes to commercially made yogurt) is the right move.

Just to be clear: prepared labneh MUST be refrigerated. See the section above for more instructions about how to store homemade labneh.

Pin this recipe for later!

What to do with leftover whey?

The liquid that drains from yogurt while it rests is called whey and you might not want to dump it down the drain. Check out this article on The Spruce Eats for some good suggestions for how to use leftover whey.