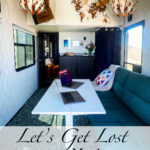 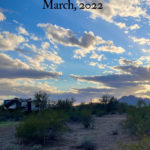 From California Oceans to Arizona Susets

The first week of March we left a busy resort-style RV park in San Diego where we'd spent 7 weeks and settled in for 3 weeks of boondocking in Ironwood National Monument, Arizona. (What's boondocking? Check out this list of boondocking FAQs)

The silence was deafening.

The RV resort in San Diego was constantly full of activity - kids on bicycles, new vacationers coming and going, pet owners taking their dogs for a walks, maintenance crews keeping everything tip-top, people talking and laughing around campfires and BBQ grills.

The energy of places in which everyone is on vacation is charged with excitement. It's fun to be in a place where everyone is happy to be there. And it's entertaining to have so much activity outside our windows.

But it's also glorious to spend a few weeks in the quiet expanse of open space where the only people around are spread out and seeking the same thing - silence and solitude.

In truth, I love both experiences equally. But this time, it took me a few days to settle in to the quiet of the Arizona desert.

The thing about silence and solitude is there's little to distract you from your own thoughts and emotions. After loosing our son 2 years ago, I have experienced emotions that I thought would break me. They didn't. But I sometimes still think they will. Solitude reminds me that I can feel what there is to feel and survive it.

I read somewhere that solitude increases self-esteem, clarity, and compassion. Personally, I have found that time spent without distraction is often an opportunity for insight, creativity, and new ideas. It also reminds me that I can be content with myself.

Our RV is a toy hauler, which means it has a "garage" in the rear that's built to haul "toys" like motorcycles and ATVs.

For us, the garage is a true multi purpose room. During the work week, it's Steve's office. And when we have people staying with us, it becomes a guest room.

The garage set-up that our RV came with was pretty standard. It included bench seating, a removable table, and a bed on a track that could be raised or lowered with the push of a button.

It's not a bad set-up, it just didn't work for us. So, over the past several months, we've been gradually transforming it into the space we want.

Here's what we did to transform our toy hauler garage into a multi-purpose space that works for us:

A Few of Our Favorite Things About Ironwood Forest National Monument

Ironwood Forest National Monument makes up a 129,000-acre section of the Arizona desert northwest of Tucson. The forest is named after the Desert Ironwood tree which grows throughout the area.

We parked ourselves on BLM land in an area called Pump Station Road Dispersed Camping. Besides being a quiet, easily accessible place with killer sunsets, here's what else we love about boondocking in Ironwood:

The first week in Ironwood was spent doing all sorts of fun things. We rode bicycles around the area, had lunch with a friend, and rode the motorcycle to Tombstone, a southwestern Arizona town famous for its Wild West history.

The second week we were there was spent repairing damage to our sewer system. So, not as fun.

For the most part, I think we went into full-time RV life with our eyes wide open. We did enough research and read enough stories from other full time RVers to know that regular repairs are a part of the deal.

There is a lack of quality control across the entire industry and even brand new, high-end RVs are not well made. Most come with warranties. Most RV owners who have taken their RV in for warranty work also have a similar story: the work took weeks or even months to complete and often didn't even actually fix the problem.

So, from the start, we resolved to make all repairs to our RV on our own. This is only possible because Steve is the kind of person who is willing and able to fix nearly everything.

Our RV came with something called a "yeti package" meant to protect the rig from freezing weather. After spending last November and December in Colorado, we knew the yeti package had not done its job and that repairs were going to be necessary.

Our time in Arizona gave us the opportunity. After taking down the bottom cover, we discovered that one of the heating pads on our tanks was not even connected and that the rest of yeti package "features" were woefully inadequate.

Steve repaired the damage caused by freezing weather and properly insulated our pipes. We are in much better shape for winter this year! The project was the most difficult one we've taken on yet, but it's also strengthened our confidence in knowing that we can take care of the inevitable problems that come with living in a house on wheels.

The other good thing about things breaking: Every time we've had a problem, Steve has learned something new about how our rig was built. Most of the time, he's used the opportunity to not only fix the problem, but improve the entire system.

The Southwest Corner of Utah

We spent the last week of March in the Southwest corner of Utah in the little town of Bluff. Bluff has a population of 300 people. It doesn't have a grocery store, but it does have a surprising number of great restaurants.

Our favorite was Cottonwood Steakhouse, where we had a fantastic steak dinner topped off by homemade cherry pie.

And also, because it's Utah, there's no shortage of beautiful, scenic drives in every direction. If you're ever in the area, we highly recommend:

Tools of our lives: Keeping My Wiretap Connected

Our Internet setup has evolved over the last two years. It started with just a MOFI4500 running an unlimited T-Mobile plan from RV-4G.com and has morphed as our needs grew.

We were initially pretty satisfied with just T-Mobile, as we spent most of our time in the Colorado and South Dakota, but as we started moving around more, we were having trouble getting decent service.

A few months after moving into our RV, we got a Verizon Hotspot for those "just in case" emergencies. It has a tiny plan of 30GB/mo, so we don’t use it unless it is the only thing we can get.

I had the bright idea not long after to buy a Weboost antenna, and that did stabilize our internet when we were in a place that didn’t have constant speeds.  But for the most part, if we didn’t have internet the booster didn’t help much.

It wasn’t long before I found the answer.

I found a site called mobilemusthave.com and they supply RVers with all the tools needed to have internet. I chose a Pepwave MAX Transit CAT18, a Parsec Husky Pro 9, 9-in-1 5G Antenna, and an unlimited AT&T data plan, that turned out to be 500GB after a few months.

I had to mount the antenna through the roof and it had a bundle of 9 of wires, 4 LTE antennas, 4 Wireless antennas and a GPS antenna. I consider the Pepwave to be one of my best purchases because it has so many amazing features, which I will go in depth on later.

Initially I had both the AT&T and Verizon SIMs in the Pepwave and the T-Mobile SIM in the MOFI4500, because T-Mobile had specifically blocked the use of the Pepwave CAT18.

Now I had another problem: I had two wireless devices and lots of devices to connect, so I would have to change the internet based on which device had service.

That didn’t last more than a week, when I then found a Synology RT2700ac, which allowed me to have two WAN connections. Now I could have one wireless and switch between the incoming internet very easily.

One of the best parts of all of these devices is that they all take 12 volts for power, so I tied them all in to my 12volt supply on the RV. If we ever have a power outage, or our inverter stops working, we still have internet.

For a while all was right with my internet, then for some reason we lost service to AT&T which we had been using almost exclusively. My best guess is that we got too close to the data limit and they throttled us so much that we couldn’t get data. We also realized that our T-Mobile SIM was dead, although I didn’t know that at the time.

I ordered another MOFI4500 and tried to get the SIM working, but no luck. So for a few days in August of 2021, we had to run our internet off of our iPhone hotspots, since Verizon didn’t have service where we were.

RV-4G.com sent a new SIM to our daughter’s apartment right away which we were able to pick up from her a few days later, and I got support from MobileMustHave.com on the AT&T issue.

That was when I got to learn more about my Pepwave.

So far I had been using my Pepwave as a generic LTE router without trying to figure out any of its amazing features. We were in Lyons, CO for 3 weeks in September when I learned that I could connect to the park’s WIFI and use it as a source of internet for my WIFI.  Wow!!!  I couldn’t believe I had that feature all that time.

Then I learned that my Pepwave had it’s own WAN port that I could connect my now second MOFI to. This gave me much faster control than switching between SIMs in the Pepwave, so I took out my Verizon SIM and put it in the MOFI4500 that I had bought to replace the first one. Before leaving Colorado, our AT&T came back online and we were in business.

One of the other features that I discovered is the ability to set a data limit for my AT&T SIM so that it won’t go over on data. If I had it all to do again, I would probably just forget the Synology all together and just us my Pepwave.

There is a con with the Pepwave: It isn’t cheap.

It was worth it to us, because we both make our livelihoods using the internet. Having an awesome device like this is key to living as digital nomads. But for RV owners who only camp a few times a year, it is way overkill.

For my geeks out there that want to know exactly how I have it hooked up, here you go:

Do we need all this?  Probably not. Am I glad we have it? YES, absolutely!

We'll see you next month. As always, if you have questions or comments for us, please leave us a comment. We love to hear from you!