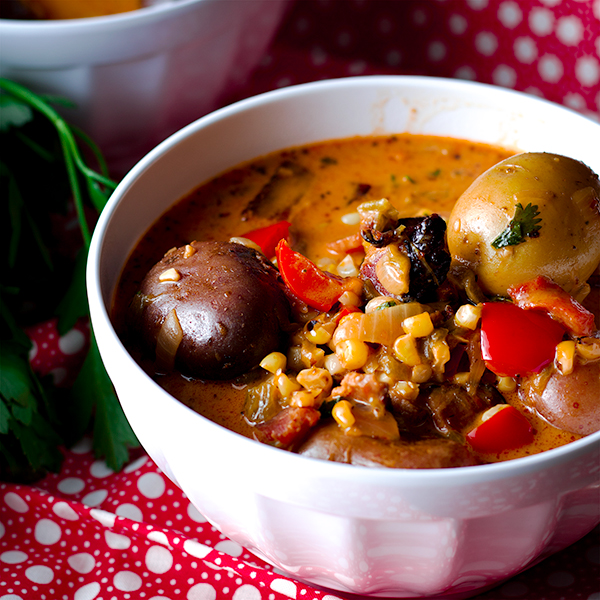 Our little town used to be more corn fields than town. Over the years, many of those corn fields have given way to shopping centers and housing developments. But, we still have our fair share of corn fields, and there are at least 4 farmer's markets within a mile of my house. For a few months in the summer and early fall, every one of those farmer's markets contains large bins overflowing with sweet corn.

Occasionally, I get ambitious and freeze a bunch of sweet corn. This makes me so happy with myself when it's the middle of winter and I'm desperately craving fresh summer produce. Alas, most summers get away from me before I manage to put away much, if any, summer produce. Knowing this, I just try to consume as much of it's deliciousness as I can while it's available. 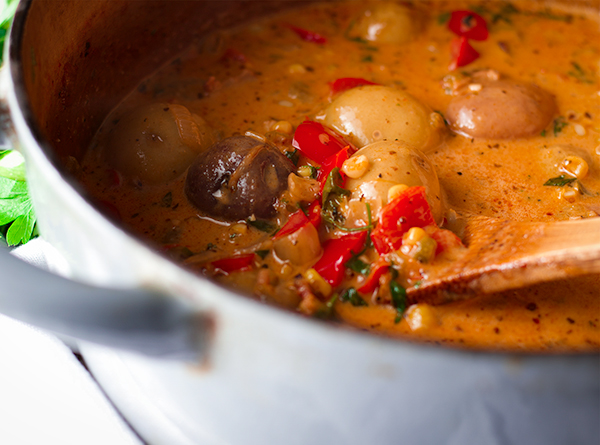 This Corn Chowder takes full advantage of the season's bounty.

This corn chowder is, of course, packed with corn. But also new potatoes, red bell peppers, and roasted poblano peppers. Flavored with a generous amount of bacon, it's creamy, a little bit spicy, and tastes even better the next day, just like a good chowder should.

The broth is flavored with enchilada sauce because, well, YUM. You have the option of using prepared enchilada sauce or making a batch from scratch. In this case, "from scratch" is kind of misleading. If it was really "from scratch", it would start with a large bag of dried red chilies that you'd have to toast, soak and puree. I've done this and it's a pain in the you-know-what.

In my kitchen, "from scratch" enchilada sauce means starting with a package or two of frozen pureed red chili paste, requires only about 10 minutes of hands-on time, and produces a richly flavorful sauce that is immeasurably better than anything that comes out of a can. I highly encourage you to take the extra step of making it.

Rest assured, if you choose to use the canned variety, your corn chowder will still be delicious. Making the enchilada sauce just makes the chowder delicious-er. 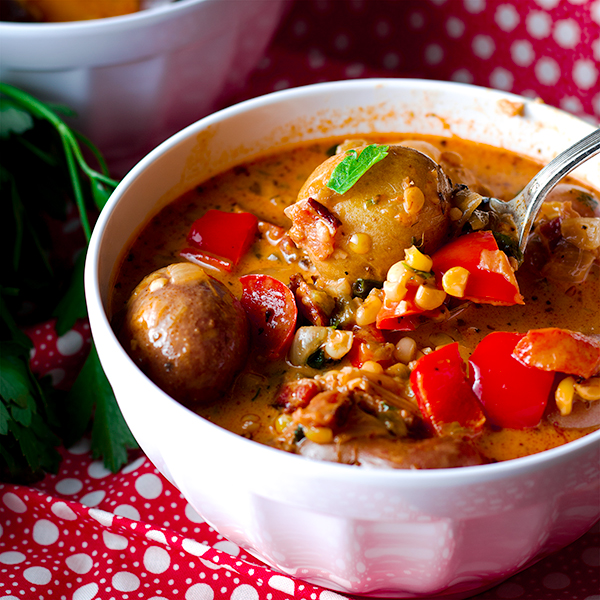 Serve with Homemade Tortillas if you really want to kick it up a notch.

Homemade tortillas are one of those things that sound like they would be a whole big afternoon project but actually only take about 30 minutes of hands-on time and are SO much better than the packaged supermarket variety they really should be in a whole different category.

The first time I made them, I knew I'd never be tempted to buy a package again. They are really that much better.

And, I get it. Adding an extra 30 minutes to your weeknight dinner prep isn't always an option. But, when you can, homemade tortillas are so totally worth it.

My favorite all-butter recipe for homemade tortillas is published on my other blog, Of Batter and Dough. 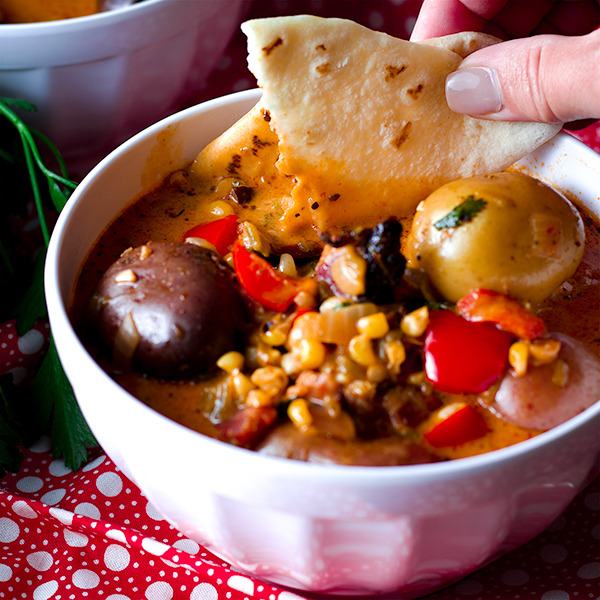 For the Enchilada Sauce, use canned or frozen, - OR make a batch from scratch, which is seriously easy and sooooooo tasty. Follow the instructions for Homemade Enchilada Sauce in this recipe for Baked Enchiladas. The recipe makes quite a bit of enchilada sauce; either make a full batch of sauce and freeze what you don't use in this soup, or make a half batch. Even making a half-batch you'll have some left over. If you're making this chowder as a part of Summer Meal Plan #3, you'll use that leftover sauce later this week to make Black Bean Tostadas with Enchilada Cream. 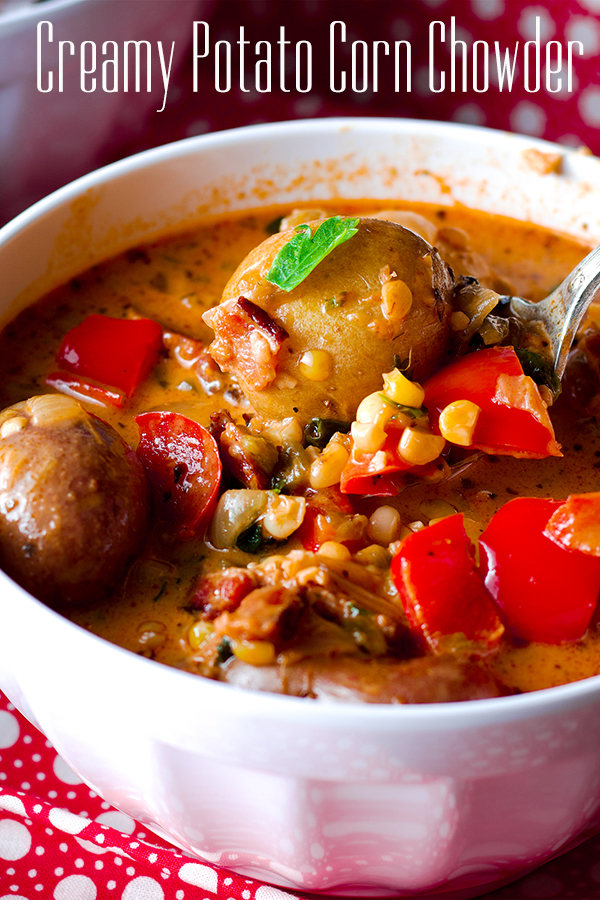 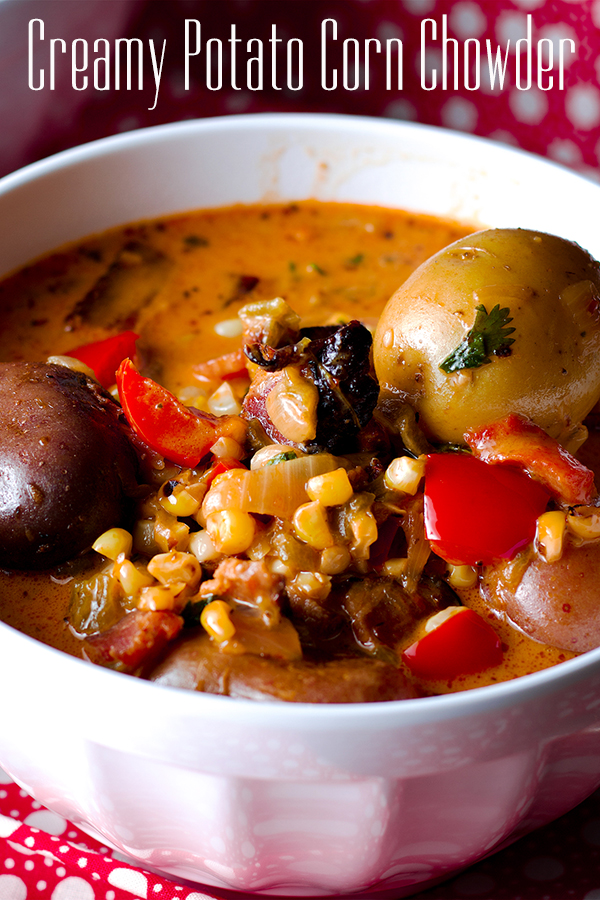