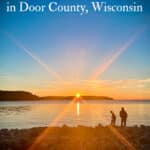 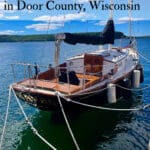 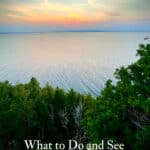 Door County is a peninsula in Wisconsin with Lake Michigan on one side and Green Bay on the other. The County is home to around 30,000 people but draws over 2 million visitors each year! Having spent the month of September there, we understand the appeal.

Door County consists mainly of charming beach towns, orchards and vineyards, sailboats, wooded parks, and golf courses. There are farmer's markets, restaurants, and cafes on every corner, 300 miles of shoreline, and dense forests filled with hiking and biking trails under dappled sunlight.

Door County is made up of one city (Sturgeon Bay) and a series of little towns and villages. You can drive the entire length of Door County in about an hour, so you're never far away from wherever you want to go.

We loved it. In fact, we loved it so much that we stayed a week longer than originally planned. If a trip to Door County is in your future (and you must go!), here are all our recommendations for what to do and see while you're there.

The first thing we did when we arrived in Door County was to take a Trolly Tour. Our tour guide was entertaining and knowledgeable and the tour helped us get our bearings by providing a fantastic overview of the area.

We highly recommend the tour as a first stop for anyone who visits Door County for the first time.

Ellison Bay and the Northern Tip of Door County

We stayed at Hy-Land Court RV Park in Ellison Bay for the entire length of our Door County stay and would highly recommend it. (If you're curious about how we find places to stay, here's some insight into our travel planning process.)

The Hy-Land Court campground is divided into two areas that have a completely different feel. One half is located in a forest with all the sites under a canopy of trees. The other half of the campground is in an open, grassy area.

We spent the first three weeks of September in a forested spot and the last week in the open area of the campground. Honestly, both areas are appealing for different reasons. I loved being nestled in the forest under a thick canopy of trees. But, it gets kind of dark in the forest and it was nice spending a week in full sunlight.

Things to do and see in Ellison Bay and the northern tip of Door County:

Washington Island is located 5 miles off the northern tip of Door County with a population of about 700 people. Most of the people who originally settled on Washington Island were Scandinavian and today the island is home to one of the oldest Icelandic communities in the US.

We took our bicycles on the ferry over to Washington Island and spent a Saturday riding around the island. Here are some things to do and see:

Sister Bay is a village on the Green Bay side of Door County that was named for the Sister Islands that flank the harbor opening to the Bay.

Ephraim is just down the road from Sister Bay and also on the Green Bay side of Door County. The village was settled by Norwegian Moravians, a deeply religious group, in the 1850's and much of their influence can be seen today.

For example, the village was dry until 2016 when residents voted to end the 163-year ban on alcohol.

Things to do and see in Ephraim:

Like the other towns and villages of Door County, Fish Creek is home to shops, restaurants, beaches, and coastline. Fish Creek is also adjacent to Peninsula State Park, and its main entrance is in the village.

Besides passing through it on your way into Peninsula State Park, here are some things to do in Fish Creek:

Bailey's Harbor is on the Lake Michigan side of Door County and home to several great beaches and hiking trails. It's also where you'll find many of Door County's kayak and bike tour companies.

There are several stories about how Egg Harbor got its name, but this is my favorite…

In 1862, several boats were traveling between Mackinac Island and Green Bay to deliver goods. The sailors decided to stop at the yet unnamed harbor and started a race while rowing ashore.

A witness, Mrs. Elizabeth Baird, wrote in her journal that the rowers were throwing hardtack at each other while racing toward the shore. Then they began throwing eggs, a few of which hit her in the head.

The great egg battle stopped only when the men ran out of eggs and the next morning the harbor was so strewn with egg shells that it was christened Egg Harbor.

Sturgeon Bay is the largest city in Door County and the place to go for essentials like major grocery stores, hardware stores, and the like. There are also a lot of great things to do and see in Sturgeon Bay. Here are just a few.

Door County is home to 19 (!) State and County Parks. One of the most popular is Peninsula State Park which includes 460 campsites, three group camps, a summer theater, an 18-hole golf course, sandy beach, bike trails, a lighthouse, and eight miles of Green Bay shoreline.

The bike trails through Peninsula State Park on some of the most beautiful we've ever seen!

Peninsula State Park is also home to Eagle tower, a 60-foot-high tower on the edge of a bluff overlooking Green Bay.

How did Door County get its name?

Door County was originally named “Door of Death” by the Potawatomi Indians because so many of the local tribes lost members trying to cross the passage in canoes.

As westerners began to arrive on the peninsula, many of them also lost their lives in the treacherous waters between the northernmost tip of Door County and Washington Island. They began to call it “Death’s Door”, which was eventually changed to the more palatable Door County.

How many lighthouses are in Door County?

There are 11 lighthouses in Door County, which gives you an idea to how treacherous the waters surrounding the peninsula can be.

If you'd like to visit some of them, here's a lighthouse map and more information about most of them.

When is the best time to visit Door County?

What food is Door County known for?

Door County is most known for fish boils and cherries. Door county is the 3rd biggest cherry producer in the US and includes 2,000 acres of cherry orchards. Between 8-15 million pounds of cherries are harvested in Door County every year.