How to Make Hash - Corned Beef or Otherwise

Corned Beef Hash is a delicious way to transform leftover Corned Beef and potatoes into the kind of casual comfort food that will turn anyone into a leftover lover. But corned beef and potatoes are just one option for cooking up a delicious hash. Here's the basic formula for how to make hash with pretty much any kind of leftover meat or veggies. 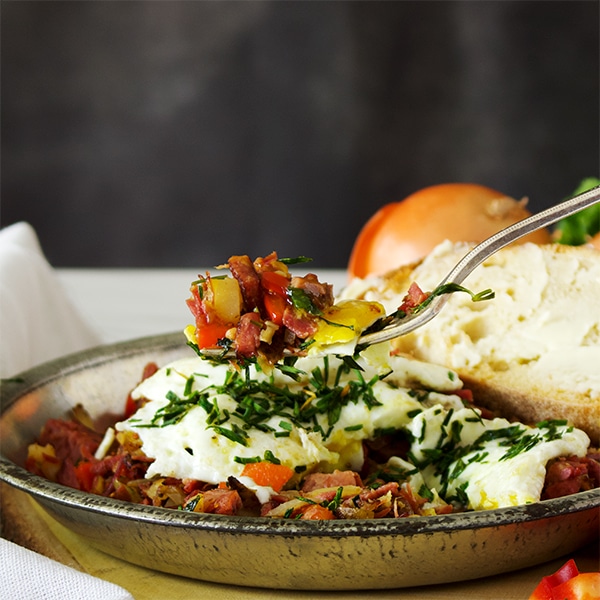 I am SO into really good leftovers. Do you have time to cook from scratch every day? Of course not. Me either. We have jobs and kids and spouses and friends and laundry and errands and whole entire lives to be lived.

The thing is, I really DO like to eat delicious food every day whether or not I've had time to cook it. And, by "delicious food", I do not mean processed or fast food or take out. I mean, actual real food. (Ok. I have been known to eat french fries and ice cream for dinner. But, I try to keep those days to a minimum.)

So, good leftovers rank really high on my list of favorite things. Notice how I keep adding the word "good" before "leftovers"? Not everything is made to be reheated or remade into something else. Bad leftovers are also a thing.

But, then there are those dishes that get even better after sitting in the fridge for a day or two (hello, Green Chili). And dishes that seem to have been invented to be made into something else. Case in point...

One of the best reasons to make Corned Beef and Cabbage is for the leftovers.

Leftover corned beef is good hot or cold, layered onto a sandwich, or made into hash. But, you don't have to have corned beef on hand to make hash.

Ham is especially good, but you could also use leftover pork chops, steak, or sausage. St. Patrick's Day being 2 days ago, we happen to have some corned beef and potatoes in our refrigerator. And by "happen to", I mean I purposefully made enough for leftovers just for hash. So worth it. 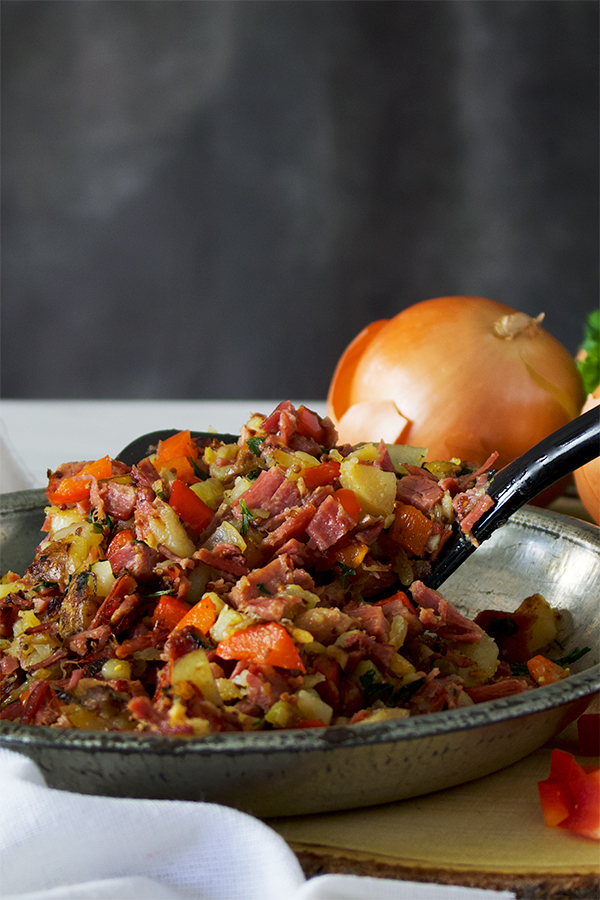 Ok. There is totally a corned beef hash recipe on this page. BUT, you don't really need it. Hash is more about throwing ingredients in the pan in whatever quantities you've got. Here's the basic formula:

Dice an onion and bell pepper. I like to use red bell peppers because they're pretty. But, any bell pepper will do. Melt some butter in a skillet and cook them over medium heat until they're soft.

Dice some leftover meat. Corned beef, of course, is a great choice. But, pretty much any kind of leftover meat will do here.

Potatoes! Hash is a fantastic way to use up leftover potatoes. I used the leftover parsley buttered potatoes that I served with corned beef and cabbage a couple of nights ago. Leftover roasted potatoes also work great. OR - use frozen hash browns.

Put everything into a bowl -  onions and peppers, meat, and potatoes. Add some chopped fresh herbs if you like and a dash or two of Worcestershire sauce. I also like to add a tablespoon or two of grainy mustard, but that's up to you. 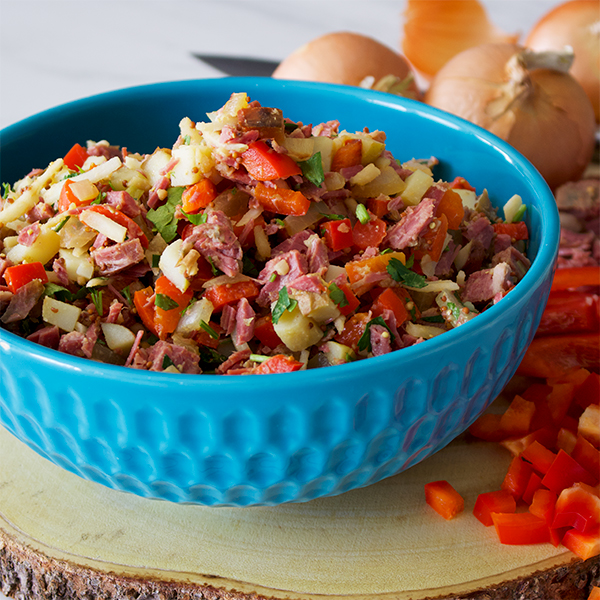 Melt some more butter in a skillet and dump in 1 & ½ to 2 cups of hash. Use the back of a spatula to press the hash down into the pan, spreading it out into an even layer. Let it cook until everything starts to get kinda crispy. Stir it around and let it cook for a few more minutes, until everything's nice and hot and there are a few crispy edges in there.

Dump the hash out onto a plate and top with an egg or two.

Or, ditch the eggs and eat it as is. But, let me just say this: the runny yolk of an over easy or poached egg is heavenly over the hash. 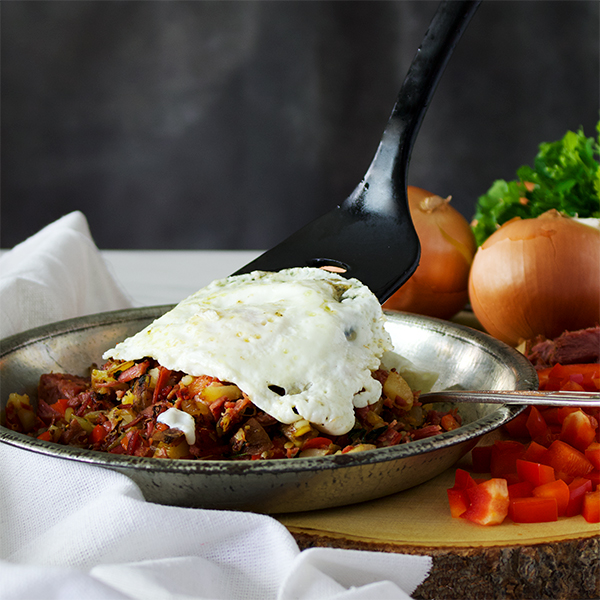 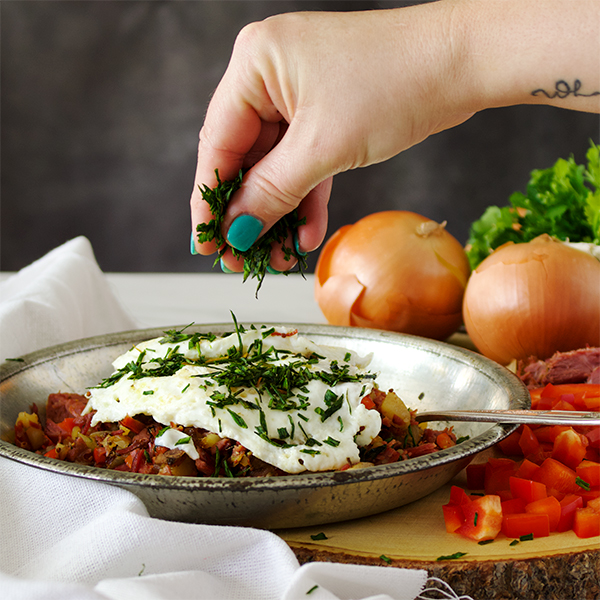 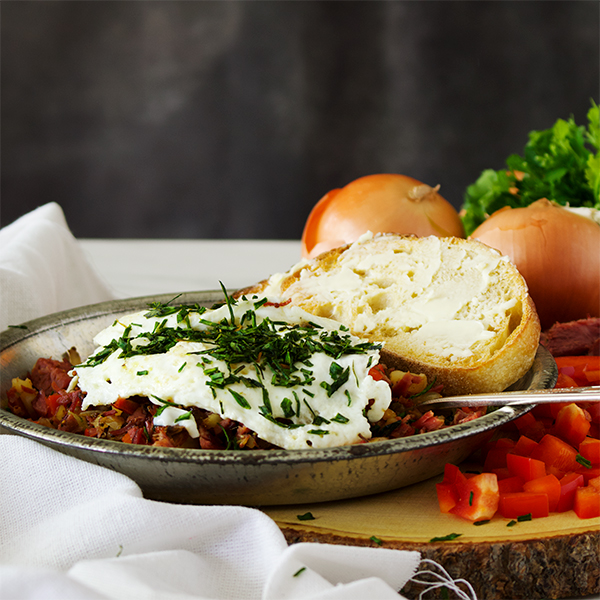 How to make Corned Beef Hash - or any kind of hash! Corned beef and potatoes are just one option. Here's the formula for turning leftovers into a feast. 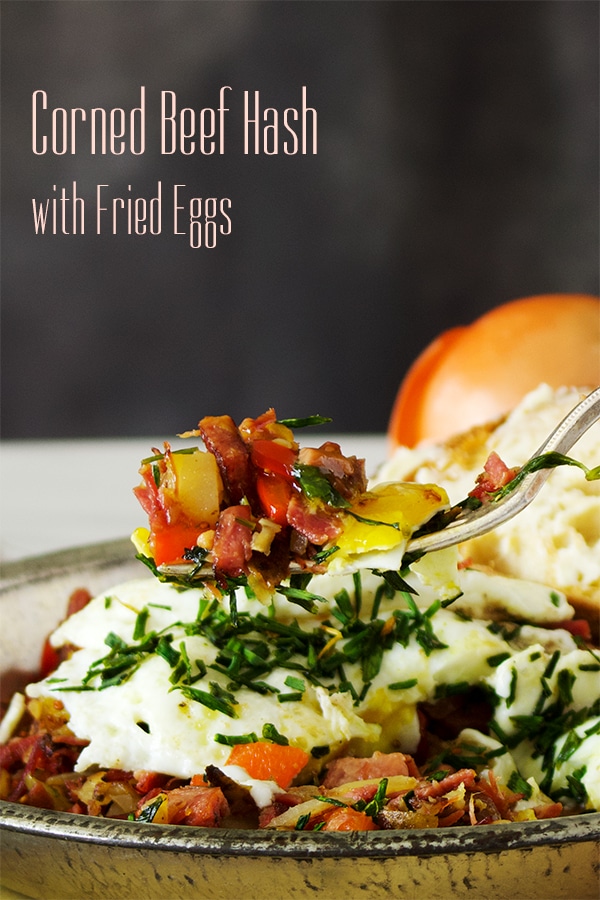