Move over take-out. Crispy fried pieces of chicken or pork coated in a sweet, tangy, nutty pomegranate raspberry sesame sauce for a unique take on sesame chicken that just might replace your normal take-out routine.

My friends, this version of sesame chicken is ridiculously good. And yes, it requires a lot more time in the kitchen than opening take-out boxes, but once you taste it, I feel strongly that you'll consider every minute spent cooking this dish time well spent.

There are three things that make this pomegranate and raspberry sesame chicken so delicious:

Buttermilk and Soy are the Secrets to Tender, Flavorful Meat

Marinating chicken or pork in buttermilk and soy sauce creates the most incredibly moist, tender and flavorful meat.

The salt in soy sauce and acid in buttermilk work together to flavor and tenderize the meat from the inside out, and prevent liquid from escaping while it cooks.

As a little bonus, the sugars in the buttermilk caramelize while the meat cooks, creating another delicious layer of flavor.

Let the pieces of chicken or pork soak in the buttermilk soy marinade for at least 1 hour and as long as 24 hours. 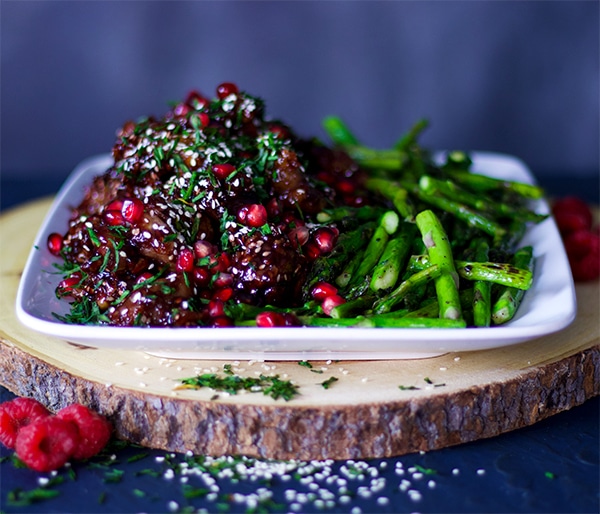 Pomegranate Molasses is one of those ingredients that can quite literally transform your cooking in the best possible way. It's nothing more than pomegranate juice that’s been boiled with a bit of sugar and lemon juice until it’s as thick as molasses.

What makes pomegranate molasses a secret weapon in the kitchen is its ability to quickly add the kind of depth and complexity to a dish that usually comes only from browning and slowly cooking food. One of the best things about it is that, even with some added sugar, its primary characteristic is not sweet.

It's sour, tangy, acidic, and even a bit smoky, and it elevates sesame chicken sauce to a whole new level of delicious.

Pomegranate molasses can be purchased at many supermarkets or easily sought out online. It's also really easy to make from scratch and will last in the refrigerator for weeks.

A bottle of prepared Pomegranate Molasses will run you around $15. Making it yourself will cost you about ⅓ of that and is as simple as pouring some pomegranate juice into a pan and letting it reduce down into a thick, intensely flavored syrup.

Making it requires only the patience to let pomegranate juice and a bit of brown sugar reduce down to a thick, rich, syrup. After that, there's no limit to what you can do with it. Drizzle it over sautéed veggies, grilled steak, or pan seared chicken. Toss kale, fresh veggies, almonds, and pomegranate seeds in a drizzle of pomegranate syrup for a deliciously elegant salad.

How to Make Extra Crispy Sesame Chicken {or Pork}

The secret is to extra crispy fried chicken or pork is to coat the meat with a mixture of flour and cornstarch.

The first time I made this recipe, I used chicken. It was so good that my husband and I started throwing out ideas for other types of protein that might be as good as chicken. "I bet this would be really good with steak." "How about pork?" "Oh yeah. You should make this with pork." "Shrimp?" "I'm sure it would be great with shrimp."

The reason this recipe suggests chicken OR pork is because I've made it with both and can tell you with absolute certainty that both are fabulous.

The reason this recipe doesn't suggest steak or shrimp is simply because I haven't tried those yet. If you come back to this recipe at some later date, and see the suggestion of using chicken OR pork OR steak OR shrimp, you'll know I tried it and loved it.

If you beat me to it and try this recipe with steak or shrimp, please let me know.

If you give this recipe a try, let me know! Scroll down to rate this recipe and leave a comment, or take a picture and tag it @alittleandalot on Instagram.

Marinate the chicken {or pork}:

Cook the Chicken or Pork:

Because it’s become increasingly popular over the past few years, you can sometimes find bottles of Pomegranate Molasses in supermarkets. And, of course, like everything else in the world, you can order it on Amazon.

A bottle of Pomegranate Molasses will run you around $15. Making it yourself will cost you about ⅓ of that and is as simple as pouring some pomegranate juice into a pan and letting it reduce down into a thick, intensely flavored syrup. Here’s how to make it..