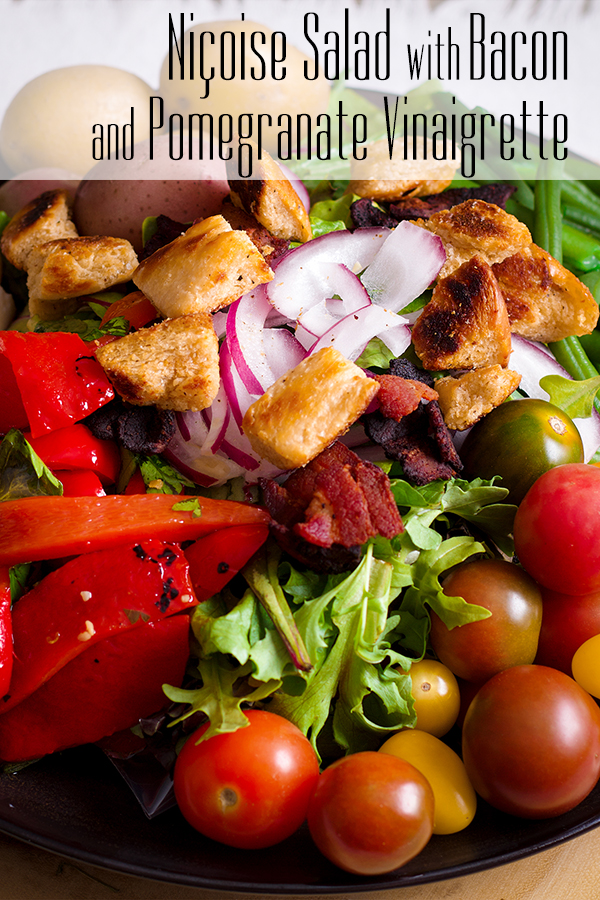 What is a Niçoise Salad?

The Niçoise Salad is a French invention, most likely originating and named after the little town of Nice. Traditionally, it's supposed to include tomatoes, olives, and anchovies. But, variations of it abound, and you can easily find it served with a wide range of vegetables, fish, and animal proteins.

What makes the Niçoise salad so fabulously versatile is that it's a "composed" salad. This simply means that all the different components are grouped together and served side-by-side instead of all mixed up, as you do with a "tossed" salad. I LOVE composed salads for a few reasons....

Obviously, Niçoise salad is an ideal way to showcase a bounty of perfectly ripe summer veggies. But, it's versatility also makes it easy to serve in the middle of winter when you're reliant on frozen vegetables, potatoes, and jars of marinated peppers or artichokes. 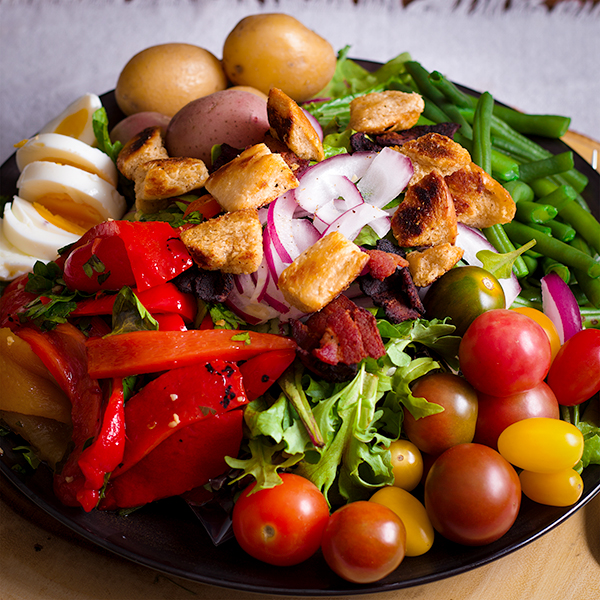 About Pomegranate Molasses and Marinated Peppers

Let me begin by saying that BOTH pomegranate molasses (in the vinaigrette) and marinated peppers (in the salad) can be purchased at many supermarkets or easily sought out online (links below).

However, they are also easily made from scratch and will last in the refrigerator for weeks.

Pomegranate molasses is simply pomegranate juice that's been boiled with a bit of sugar and lemon juice until it's as thick as molasses.

A bottle of Pomegranate Molasses, purchased in the supermarket or online, will run you around $15. Making it yourself will cost you about ⅓ of that and is as simple as pouring some pomegranate juice into a pan and letting it reduce down into a thick, intensely flavored syrup.

One liter of pomegranate juice will make about a cup of pomegranate molasses, which will keep in your refrigerator for up to 6 months and can be brushed over meats and veggies, added to soups, stews, gravy, or sauces, and even added to cocktails.

What I'm saying is this: buy it if you must, but making it is super easy and totally worth it. Here's how to make Pomegranate Molasses. 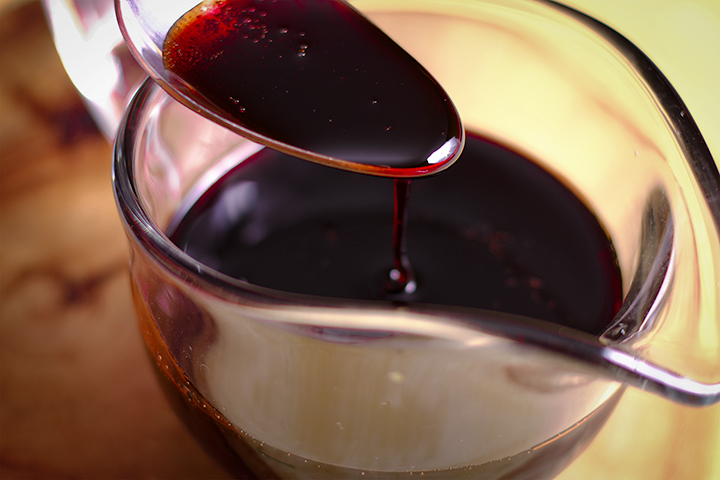 While I nearly always make Pomegranate Molasses from scratch, I go back and forth with Marinated Peppers. Homemade Marinated Peppers are 100% better than anything you'll ever find in a jar. They are by no means difficult to make and will keep in your refrigerator for up to 3 weeks (perhaps longer).

But, they do take about 30 minutes to make. And, while I greatly prefer the flavor of homemade marinated peppers, there are times when I really want to add them to a salad or sandwich right now. As such, I almost always have a jar or two in my pantry.

If you have time to make a batch of marinated peppers from scratch for this salad, that is the most delicious option. But if you don't, opening a  jar is perfectly fine. If you can find them, Cento Roasted Peppers is a pretty good quality brand. 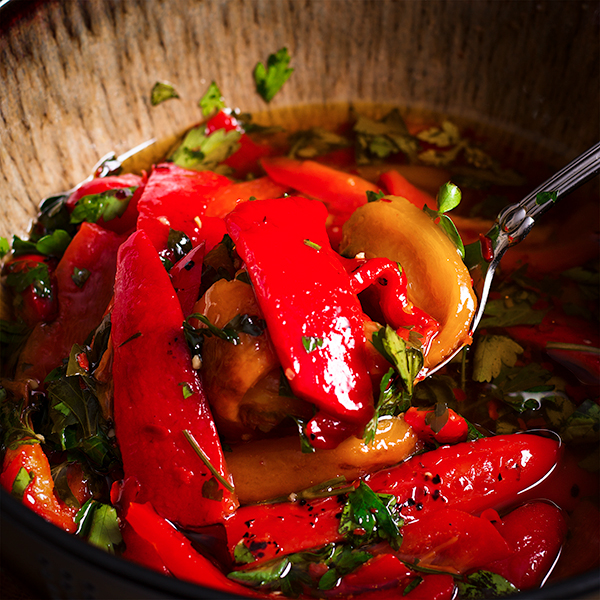 About the Veggies and the Bacon

The main thing I want to stress about this salad is that every single ingredient is optional and can be swapped out for anything else that strikes your fancy.

This particular combination of marinated peppers, potatoes, eggs, bacon, green beans and tomatoes is, to my taste buds, absolutely delicious. Also, the selection of veggies makes it a year round kind of dish. The green beans can be fresh or frozen. If you have access to gorgeous, ripe, in-season tomatoes, by all means use those. Otherwise, cherry tomatoes tend to be tasty in most parts of the country year round.

Like the vegetables, the bacon is optional and can easily be swapped out for any kind of seafood or poultry, steak or ham. Making a Nicoise salad is one of my all-time favorite things to do with leftover Roast Chicken. If you want to leave out the animal protein altogether, consider adding a cup or two of Slow-Cooked Beans, or even just a handful of roasted nuts.

> Browse through all Salad Recipes.

As an Amazon Associate I earn from qualifying purchases. 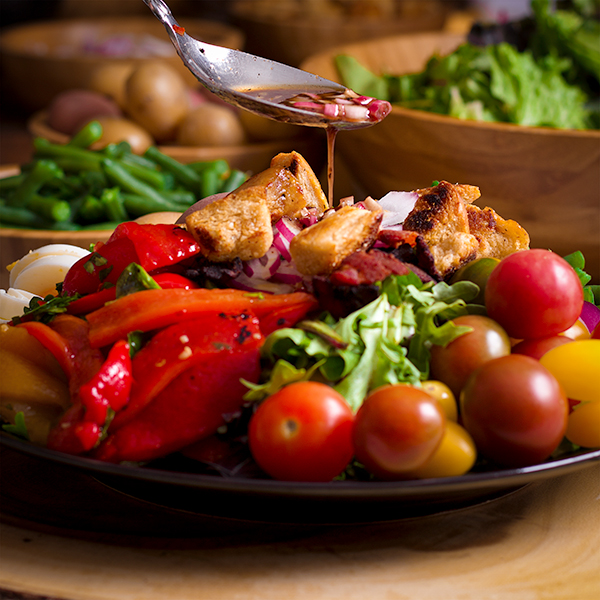 Meal Plans that Include this Recipe:

For the Pomegranate Molasses Vinaigrette: 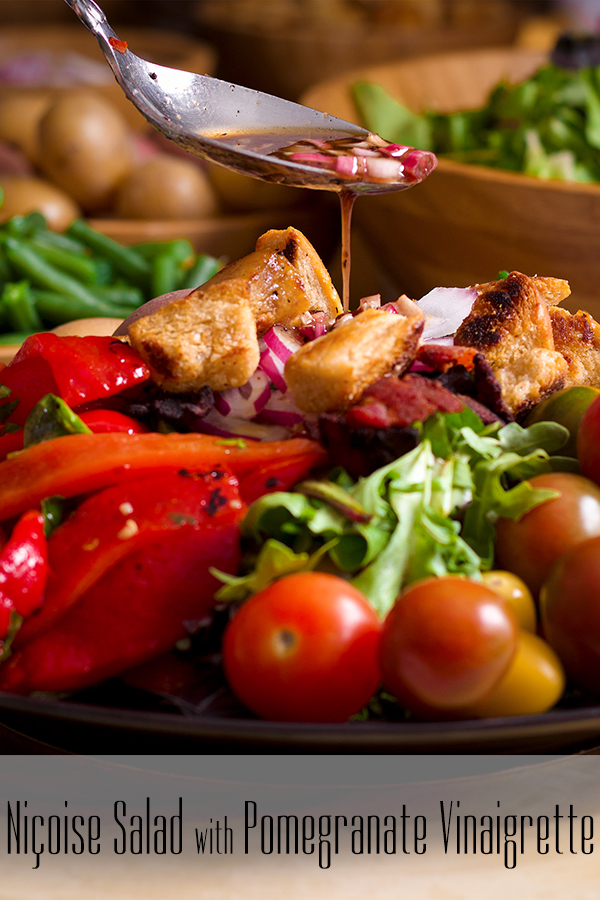