You are here: Home / Casseroles / Cheese Enchilada Casserole with {or without} Chicken
Jump to Recipe·Print Recipe
153shares 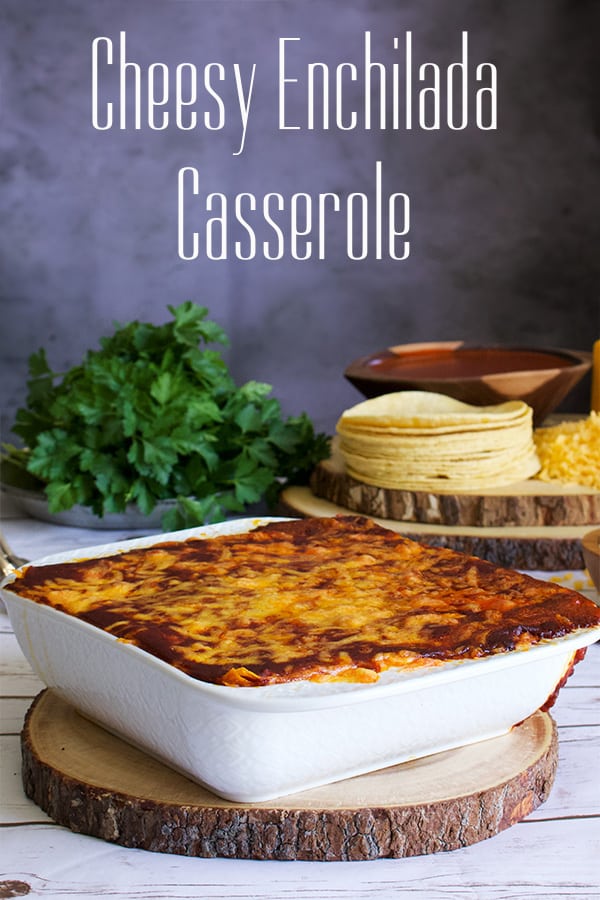 The red chili sauce must be amazing and made from chilis, not tomato paste. In other words, none of that canned stuff. Incidentally, here’s the ingredients list of one of the most popular brands of canned red enchilada sauce:

It’s really just watered down tomato paste with some chili pepper seasoning and a bunch of other crap, reminding me why I cook so many things from scratch.

Call me crazy, but I’d like my red chili sauce to be made from… oh, I don’t know… red chilies.

The big problem with that is that it’s a giant pain in the you-know-what to make red chili enchilada sauce when you start with actual red chilies. They have to be toasted, soaked and then pureed.

The process takes a long time, is kind of messy, and fills the air with eye-stinging chili oil. I’ve done it. The red chili sauce was delicious. And I don’t ever want to do it again.

This stuff is genius. I’ve purchased a few different brands, mostly dependent on what my local market happened to have in it’s freezer case. As long as the ingredient list looks something like this – Chile Peppers, Water, and maybe some salt – you’re golden.

Here’s the brand my local supermarket is stocking at the moment: 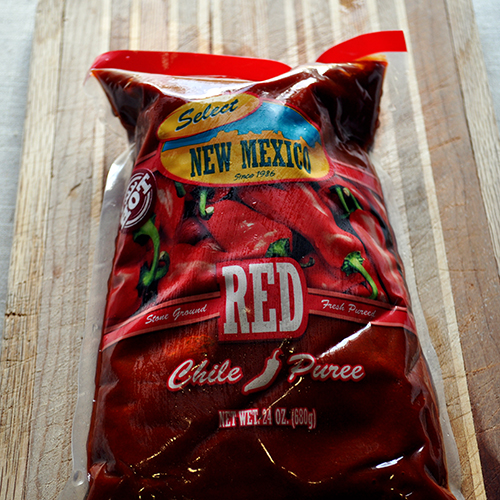 I generally purchase one bag of hot and one of mild and mix them together for a spice level that’s on the medium-to-hot side. When coupled with layers of corn tortillas, cheese, and sometimes chicken, I think it’s the perfect amount of spicy red chili awesomesauce. 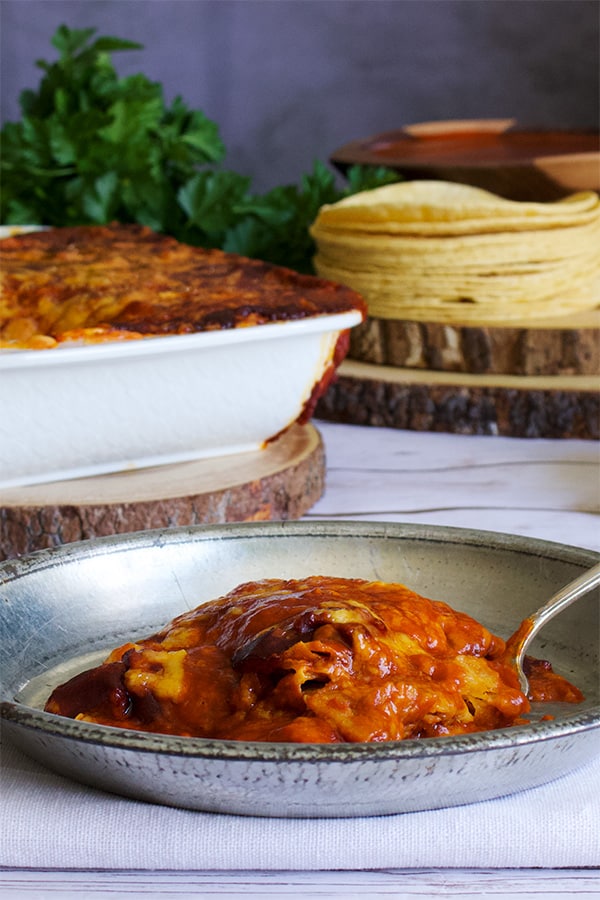 Melt some butter and add some flour to make a roux that will thicken your red chili slightly. Then just add the red chili puree, some spices, and broth or water and let it simmer for a while. That’s it.

The recipe below makes more red enchilada sauce than you’ll need for this cheese enchilada casserole. If you’re making this dish as a part of Winter Weekly Meal Plan #1, you’ll use that extra enchilada sauce in tortilla soup and stuffed poblano peppers later in the week, putting you waaaaaay ahead of the game. 🙌

If you’re not making this dish as a part of that meal plan, freeze the leftover enchilada sauce. I like to divide leftover red chili sauce into little baggies with about 12-oz of sauce in each. It’s really awesome to have on hand if you’re making tacos, burritos, or huevos rancheros, or to add a nice kick to pretty much any kind of soup. 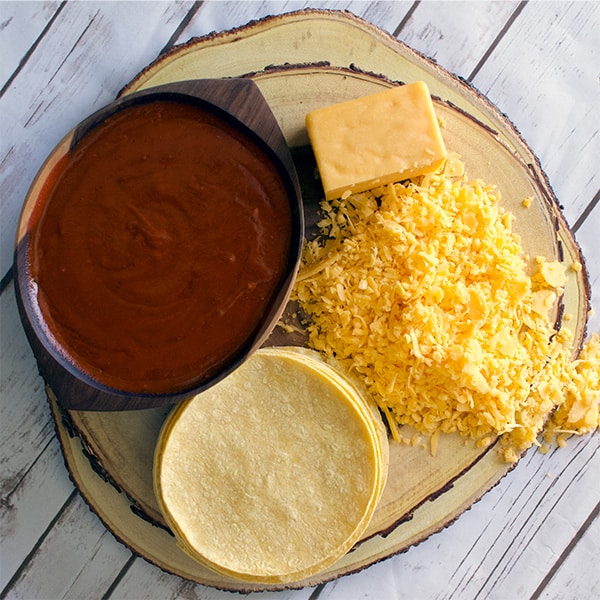 This is the kind of Chicken Enchilada Bake where the chicken is optional.

If you have some already cooked chicken on hand, such as leftover roast chicken, use it. If you don’t, or you would just rather eat some cheesy enchilada goodness that’s unencumbered by chicken, go for it.

And, of course, if you’d rather roll your enchiladas instead of stacking them, be my guest. Rolled enchiladas, with their centers of melted cheese are (as previously stated) one of my favorite things in the world.

But, layering everything into a casserole dish is So. Much. Easier. 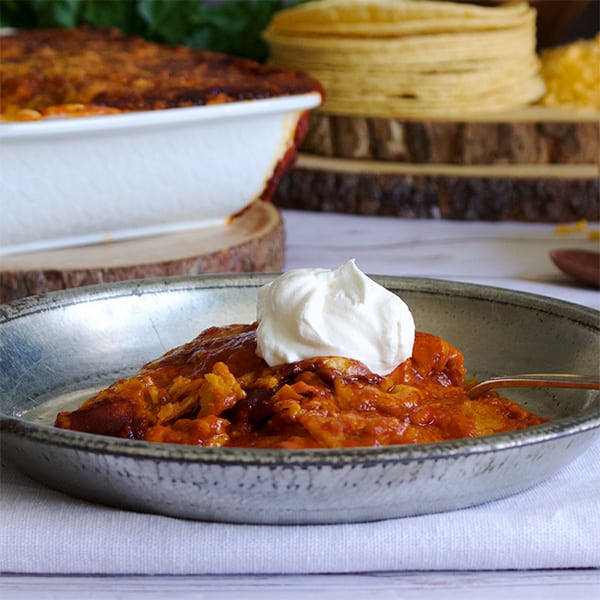 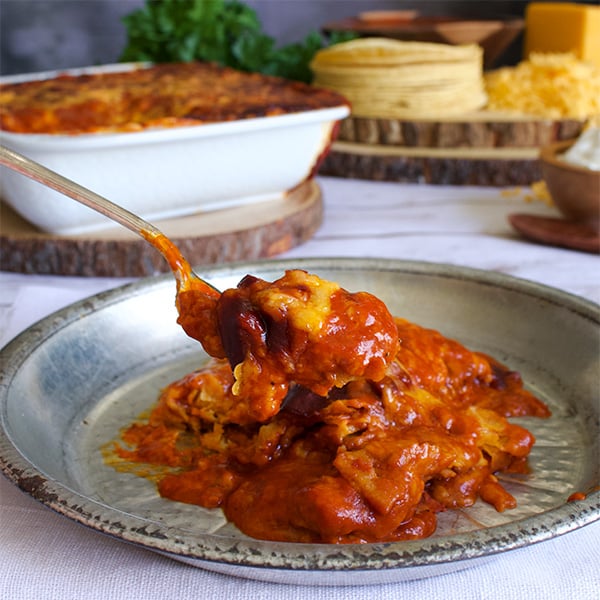 For the red enchilada sauce:

To assemble the chicken enchilada bake: