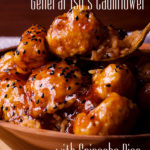 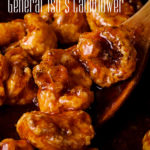 Oh yeah. This recipe also happens to be both vegan and gluten free.

General Tso's Chicken is a popular American Chinese recipe that involves little pieces of fried chicken coated in a sweet, sour, and spicy sauce. I was curious about how it got its name so I did a little research and came across an NPR article explaining the origins.

Apparently, General Tso's Chicken is the most famous Hunanese dish in the world. This is kind of funny, because most people actually living in Hunan have never eaten it.

The dish is named for a real person - Tso Tsung-t'ang - a nineteenth-century general who is said to have enjoyed eating it. Good story, just not a true one.

The real story is that General Tso's Chicken was created by Peng Chang-kuei, a Hunanese chef who fled to Taiwan after WWII. He created the dish in the 1950's using traditional Hunanese flavors and characteristics - heavy, sour, hot and salty.

Peng moved to New York City in the 70's and opened a restaurant. Rather than stick to traditional Hunanese flavors, Peng adapted the dishes to American tastes. Translation: he added sugar.

Peng had a huge influence on American Chinese cuisine, creating much of what is served to this day in "traditional" Chinese American restaurants. In the 90's he took the recipe for General Tso's Chicken back to his hometown in Hunan and...  the Hunanese people weren't crazy about it.

Still, a handful of Chinese chefs, traveling abroad and giving Chinese cooking lessons, added to their repertoire because even though the Hunanese people weren't crazy about General Tso's Chicken, the rest of the world loved it. This solidified it as a Hunanese dish even though the vast majority of people in Hunan have never heard of it.

I love General Tso's Chicken and the strange story of how it came to be. But...

I love this General Tso's Cauliflower recipe even more.

This cauliflower version of General Tso's Chicken is still fried and covered in sweet, sour, and spicy General Tso Sauce. But, it's a bit lighter, super crispy, and served over a bed of sriracha rice.

The sauce is easy to make and can be as mild or spicy as you like. And the whole dish is more flavorful than cauliflower florets have the right to be.

The recipe is entirely plant based, but will please carnivores as much as vegans. Trust me on this.

I tried a LOT of variations of breaded fried cauliflower while working on this recipe. I first tried dipping the cauliflower in batter. I tested batter with various amounts of eggs, with equal amounts of flour and cornstarch, with more cornstarch than flour, and with more flour than cornstarch.

In all these experiments, the batter felt heavy, wasn't terribly crispy, and masked the flavor and texture of the cauliflower.

Next, I tried dipping the cauliflower in eggs, then in a mixture of flour and cornstarch. This was better, but still heavy and still not as crispy as I wanted.

Finally, I tried tossing the cauliflower in egg whites and dipping them in plain cornstarch. The result was tender cauliflower coated in a thin, super crispy shell that wasn't heavy and didn't cover up the flavor of the cauliflower.

The process couldn't be easier.

#1: Beat a few egg whites with some salt and pepper, then toss in the cauliflower to coat.

#3. Fry until crispy and DELICIOUS.

I am kind of addicted to this sauce. It's a delicious combination of sweet, sour, and spicy and so easy to make that I'm tempted to cover everything in it. Here's how to make it...

#1. Cook scallions, ginger, and orange zest in a bit of oil to release their flavors.

#2. Add ingredients that bump up the flavor!

Add some chili garlic sauce - as much or as little as you like! - along with soy sauce or Tamari, sugar, rice vinegar, and vegetable broth or plain ol' water. Let it simmer for a few minutes until your kitchen smells positively dreamy.

Stir some cornstarch into a bit of water or broth and and whisk it into the sauce until it's all thick and glossy and gorgeous.

How to make Sriracha Rice

Just like everything else in this recipe, making Sriracha Rice is super-duper simple:

Pssst! This recipe uses less water to cook Jasmine rice than what is common. Trust me on this. Using less water will result in fluffy, tender rice that's not sticky and primed to absorb all the flavor from the sriracha vinaigrette.

#2. Add all the ingredients for Sriracha vinaigrette to a bowl - sriracha, rice vinegar, soy or Tamari, sesame oil, salt and pepper - and whisk.

#3. Pour the vinaigrette over the rice, toss it around with a fork to coat all the granules in the sauce, and you're done. Taste and add more sriracha if you like it hot.

Sriracha Rice is Delicious With Other Dishes Besides General Tso's Cauliflower

Just last night I was making BBQ pork for dinner, noticed a container of leftover Sriracha rice in the refrigerator, and thought... why not?

I reheated the rice, scooped it into bowls and topped it with pork swimming in southern style BBQ sauce. It was DELICIOUS.

This leads me to the conclusion that Sriracha Rice has many, many other uses then as a base for General Tso's Cauliflower. So, make extra and use it in whatever else you like throughout the week.

Q: How do I make General Tso's Cauliflower gluten free?

A: This recipe uses cornstarch instead of flour in the breading for the cauliflower, making it naturally gluten free. To ensure the dish is 100% gluten free, be sure to use Tamari instead of soy sauce in the General Tso sauce.

Q: Can I use a different kind of rice instead of Jasmine Rice?

A: Absolutely. Feel free to use any kind of long grain rice in this dish, but you might need to increase the amount of water needed to cook the rice.

Over the years I've found that cooking Jasmine Rice in less water than is commonly called for results in fluffy grains of rice that are tender that don't stick together. If you choose another variety, like Basmati, use the amount of water recommended on the package.

Q: Do I have to use a deep fry thermometer?

The only way to ensure that the temperature of your oil is a perfect 350 degrees F (176 degrees C) is to use a deep fry thermometer.

Deep fry thermometers can be found in most home goods and kitchen stores, or ordered online.

Q: Can I use an air fryer to make General Tso's Cauliflower?

A: Yes! Preheat your air fryer to 400°. After coating the cauliflower florets in batter place cauliflower on greased tray in air-fryer basket. Cook until golden brown and tender, 10-12 minutes.

Q: How spicy is this General Tso sauce?

A: General Tso sauce is usually on the spicy side, but how spicy your sauce ends up is 100% up to you.

Incidentally, coating the cauliflower with cornstarch makes this recipe gluten free. The sauce calls for either soy sauce or Tamari. Opt for Tamari and the whole thing - crispy cauliflower and General Tso's sauce - is gluten free.

For the Sriracha Rice:

For the General Tso's Sauce:

If you want this recipe to be gluten free...

Be sure to use Tamari instead of Soy Sauce.

Can you use another kind of rice instead of Jasmine Rice?

Absolutely. Feel free to use any kind of long grain rice in this dish, but you might need to increase the amount of water needed to cook the rice.

Over the years I've found that cooking Jasmine Rice in less water than is commonly called for results in fluffy grains of rice that are tender that don't stick together. If you choose another variety, like Basmati, use the amount of water recommended on the package.

For perfectly cooked cauliflower, use a deep fry thermometer.

Deep fry thermometers can be found in most home goods and kitchen stores, or ordered online (see the link below).

Mild to super spicy - the heat of this dish is up to you!

General Tso sauce is generally on the spicy side, but how spicy your sauce ends up is 100% up to you.