If you're serious about making the best pulled pork sandwiches on the planet, start with slow cooker carnitas that you've cooked until falling-apart tender.

Toss that amazing shredded pork in a tangy mustard sauce, and pile it on a bun, as high as you dare, topping the whole thing with a generous portion of crispy pineapple coleslaw. The effect is a balanced explosion of salt, sweet, and sour, the crunch of coleslaw creating a phenomenal contrast to the tender pork. 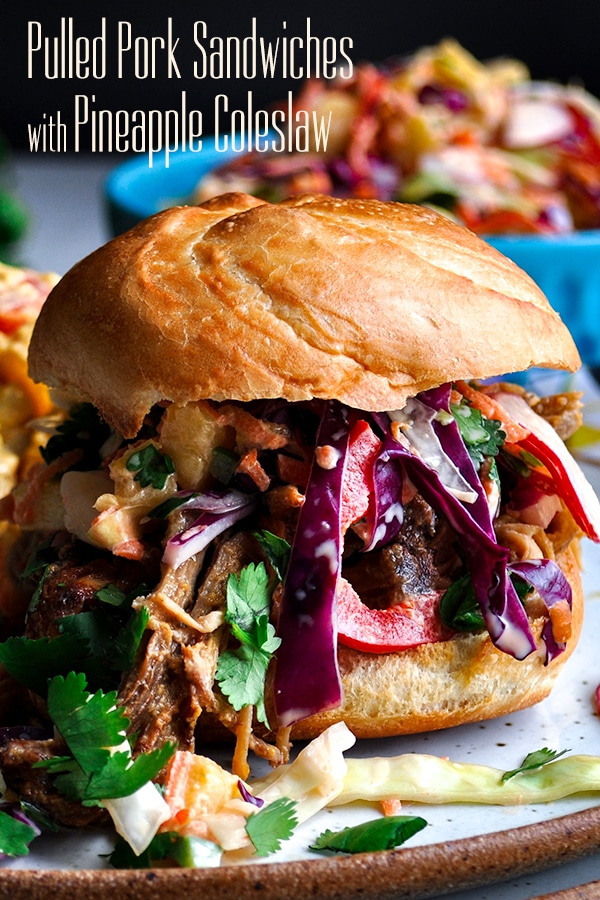 I wish I would have recorded my 20 year old daughter eating one of these pulled pork sandwiches so that I could let you listen. Never in the history of ever has anyone enjoyed a sandwich more. There were shouts. There were expletives. There were proclamations of love and adoration. There were awkward moments when I thought I should maybe leave the two of them alone.

I can't really blame her. These smoky sweet sandwiches are kinda bomb.

And by kinda, I mean totally. Slow roasted pork carnitas (one of my favorite things on the planet) is smothered in a vinegary mustard sauce, piled onto a toasted bun, and topped with pineapple coleslaw. It's safe to say that there's a whole lot of flavor going on in there.

Here's the other thing you should know about these puled pork sandwiches: One of our neighbors stopped by right after I made these, but turned up her nose when we told her what they were. She took a bite out of sheer politeness. Then snarfed down the whole thing in about 30 seconds.

So, if you have people in your family who say things like, "pineapple coleslaw?" "vinegar mustard sauce?", with their faces all scrunched up - do not be discouraged. One bite will win them over. 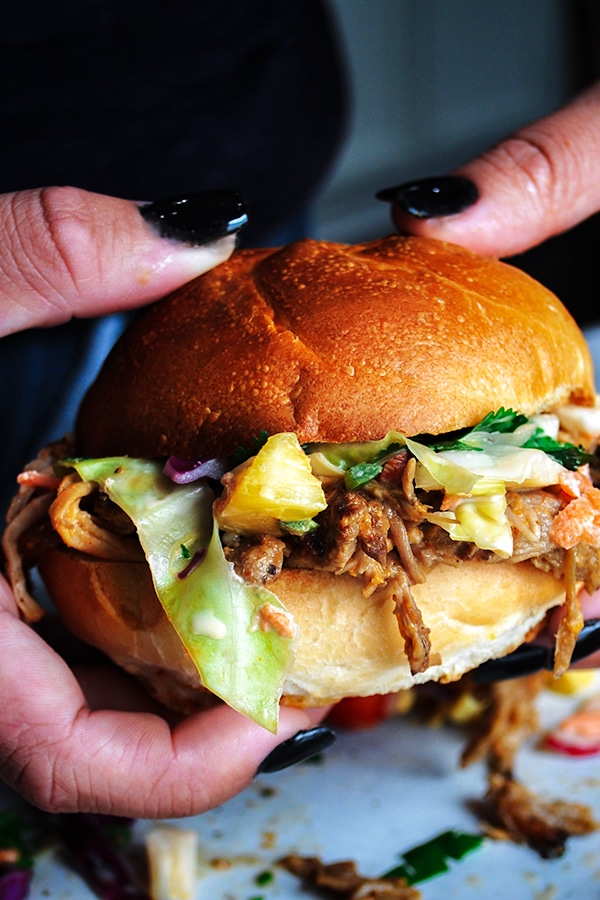 Trust me on this, people. Tangy pulled pork in mustard sauce is meant to be eaten with pineapple coleslaw. Their relationship is an epic love story with a bite-after-delicious-bite kind of fairy tale ending that leaves you sated, satisfied, and immensely happy with your lot in life.

Ideally, the story of these sandwiches unfolds like a mini-series.

Part one is all about a BIG batch of Slow Cooker Pork Carnitas, which you use to make tacos that are so ridiculously good that everyone you feed them to instantly commits to the entire series. (So, be careful who you feed them to.)

Part two opens with the star of this show - carnitas! - having had a dramatic transformative life change, evolving into quinoa veggie bowls, taco salad, smothered burritos, or Spanish potato soup, or... anything else you can imagine. There is a literal endless amount of delicious possibilities for what pork carnitas can become. How this part of the story unfolds is completely up to you. I'm giddy with anticipation.

You might as well contact Dior now to start making arrangements for your gown or tux because you're going to win awards for this masterpiece. I'm telling you. 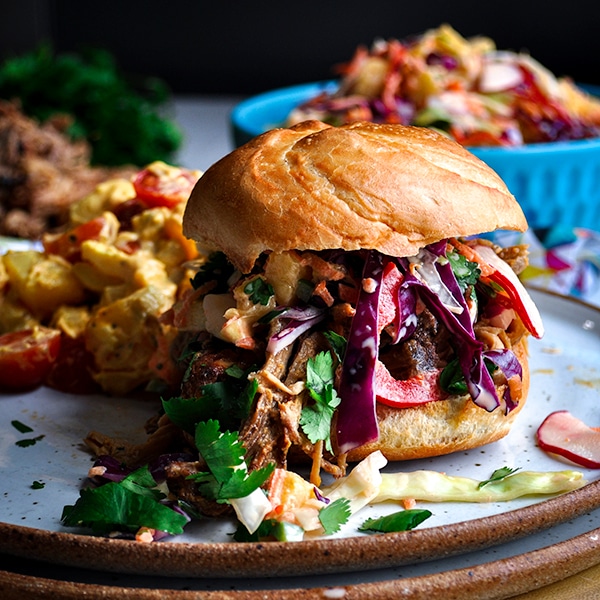 If you want to make the carnitas just for these sandwiches, that's cool too.

They really are the kind of thing that taste like you've been slaving away in the kitchen all day even though the slow cooker did all the work. 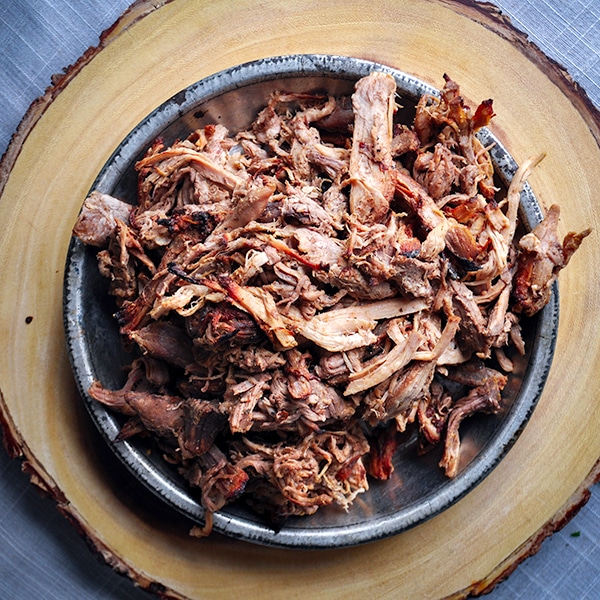 The Pineapple Coleslaw and Mustard Sauce can be made in advance.

Pineapple Coleslaw will keep well in the refrigerator for up to 5 days. The mustard sauce only takes about 5 minutes to throw together. BUT, having both on hand makes throwing these sandwiches together ridiculously fast.

Potato Salad is the perfect side kick to Pulled Pork Sandwiches

Mustard potato salad, topped with fresh cherry tomatoes is an amazing compliment to these pulled pork sandwiches. The flavors in the potato salad are similar enough to what's going on in the mustard sauce and coleslaw to not compete, while offering that creamy somethin' somethin' to cut through the flavor explosion of the sandwich.

It's the love triangle that every story needs to be truly great. 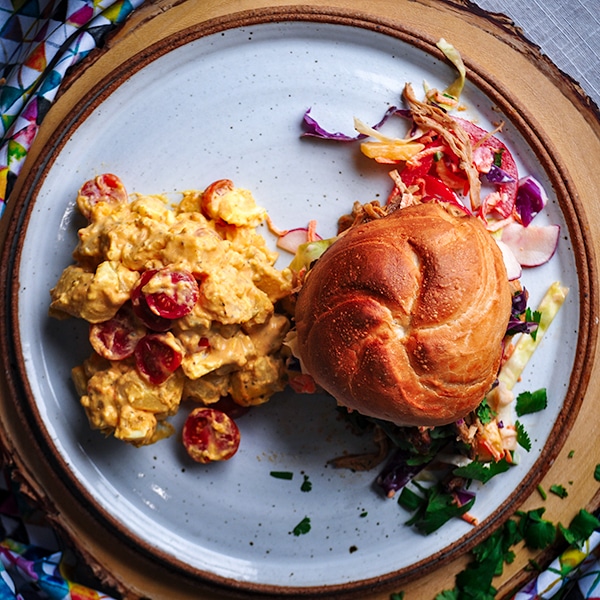 A big shoutout to Beth Bowman of Bowman Ceramics for the handmade plates in these pictures. These plates are phenomenal. They are sturdy, practical works of art that somehow manage to be both casual and elegant at the same time. 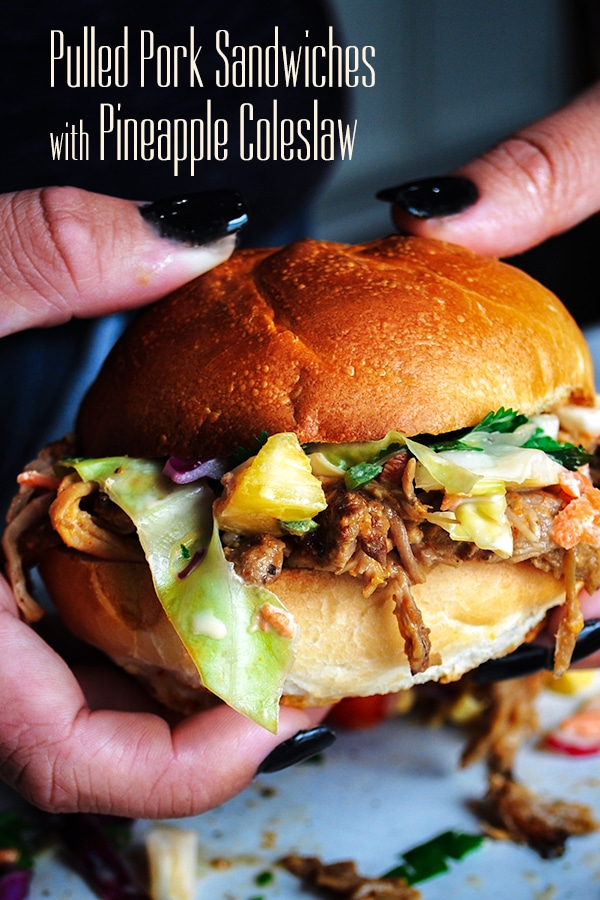